Boye: "If this Spanish tweet had come from Erdogan, what would Europe say? 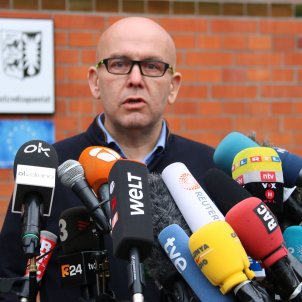 "What if Erdogan had issued a tweet like the Spanish government's one?" This was one reaction - from lawyer Gonzalo Boye - to a tweet published by Spain's interior ministry this weekend, sharing an image showing the definition of terrorism in the Spanish criminal code "just in case" anyone needs reminding about it at present. The tweet was sent at the start of a weekend featuring the politically-controversial final of Spain's football cup, the King's Cup. Gonzalo Boye, lawyer representing the exiled Catalan ministers, was one of those who responded to the tweet's warning tone:

Translation: Can you imagine what they would say in Europe if Erdogan sent a tweet like this? - Gonzalo Boye

The original tweet, which Boye was replying to, was sent on Friday from the official account of the Spanish interior ministry led by Juan Ignacio Zoido. It read: "The criminal code specifies what is considered to constitute a crime of terrorism. We are sharing an image in case anybody needs to reflect on this during the weekend. Everyone else, rest easy, as the Civil Guard and the Police take care of the security of everyone".

The text included in the image, from the Spanish criminal code, begins by explaining that an offence of terrorism is "any serious offence against life or physical integrity, freedom, moral integrity, (...) or against the Crown,..." - among a long list of other possible defining characteristics. It is precisely the phrase “against the Crown” which has led to speculation that the motivation for the tweet was Saturday's football final, that of the King's Cup, at which it has become a regular occurrence for the Spanish national anthem to be heavily whistled, in the presence of Spain's King Felipe VI, in particular from fans of F.C.Barcelona, which has played most of the finals over the last decade.