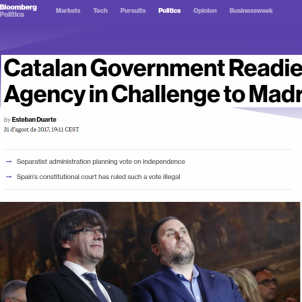 The development of the Catalan Tax Agency is awakening interest at an international level. The financial media company Bloomberg has published a report on the growth of the Catalan Treasury with exactly one month to go before the 1st October referendum. The agency describes the progress of the Tax Agency and relates it to the institutional clash between the Catalan and Spanish governments over the independence movement.

The well-known media company describes the will of the Junts pel Sí (Together for Yes) government to approve the Law of Transitional Jurisprudence and Foundation of the Republic with which it could manage all taxes. "The bill includes provisions to take full control of taxes currently paid to Spain," explains Bloomberg.

But that's not all. The US agency also notes that the relationship between the taxes paid and the investment in Catalonia, the fiscal deficit, is one of the main reasons why they want control over taxes and, also, why they want independence: "Catalonia pays about 8.8 billion euros more than it receives, according to Spanish government calculations, a longstanding gripe of the separatists".

"A challenge to Madrid's control"

Bloomberg emphasises the Catalan government's capacity to manage 4.5 billion euros with the recent implementation of the Tax Agency, which they consider a "challenge [to] Madrid's control of taxes". In fact, to exemplify this advance, they explain that the Tax Agency "will be ready to handle income, corporate, sales tax and social security contributions from virtually all 180 companies owned by the Catalan government".

The articles exposes that in the case of a "clash" between the governments of Puigdemont and Rajoy, the Tax Agency could act as "leverage". They also note that, although the autonomous community has the right to process tax payments, it still has to "pass on funds to Madrid".

Intervention in its autonomy

Bloomberg also reports the words of the Spanish deputy prime minister, Soraya Sáenz de Santamaría, and of the Secretary of the Treasury, Cristóbal Montoro, to explain that in the midst of the institutional clash, there's the possibility that the Spanish government might "intervene in the region's finances". "The Spanish government has prepared measures to block any effort by the Catalan administration to break the law," they quote Santamaría as saying. 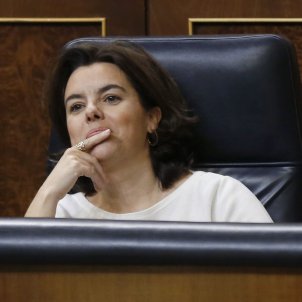 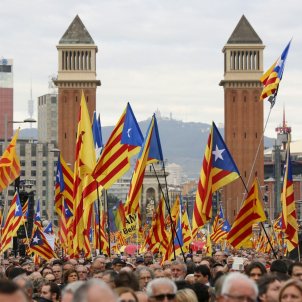