Aragonès: "A pardon is welcome, but the solution is an amnesty"

The news that the Supreme Court is opposed to pardoning the Catalan pro-independence prisoners fell like a bombshell on the first meeting of the new government of Catalonia, when it was just about to start. It was not a surprise - but it was obviously the subject of comment among the renewed travelling companions of the new coalition, especially after Spanish PM Pedro Sanchez - who will have the last word - had hinted that he could grant the pardons. The first meeting of the cabinet, moments after the swearing-in ceremony for the ministers, served to warm up engines, but no new measures were approved. “There was still no margin because the government was not in place,” said Generalitat sources. 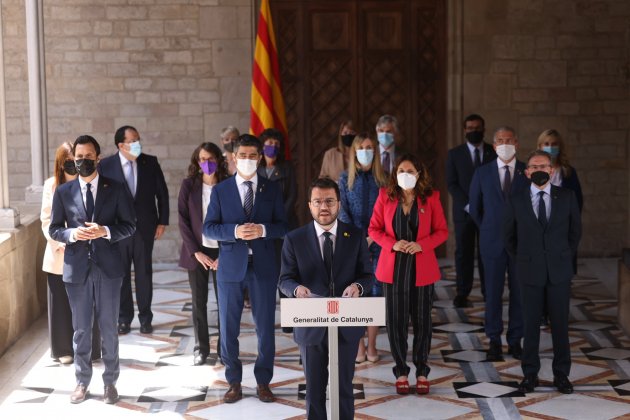 Aragonès appears in the Generalitat palace's Gothic Gallery with his government. / S. Alcazar

"Our proposal is an amnesty, but we are also clear that we will not oppose any measure that can alleviate the pain of the prisoners, their families and Catalan society," concluded Aragonès during his appearance, after the first government meeting. "When we are before any opportunity in such a harshly repressive situation, we will not oppose any measures," he added, adding that they expect a "just solution" and that "the proposal that raises the most consensus is amnesty and self-determination." With regard to the report issued by judge Marchena on behalf of the Supreme Court, he lamented that "it follows the repressive line of a general case against the independence movement."

In the coming days, Pere Aragonès will pick up the phone to contact Pedro Sánchez and start addressing the two priorities set in relation to the Spanish government: on the one hand, the management of the European funds to recover from the pandemic, which Madrid must distribute among Spain's Autonomous Communities, depending on the projects submitted by each; and the other second big issue is the entrenched political conflict and the resurrection of the promised dialogue table.

It has been more than a year since the negotiating table between the Catalan
and Spanish governments has been in hibernation - practically from the day after the day it was born. Both the ERC party in Catalonia and the PSOE-Podemos executive in Madrid attribute this lethargy to the reluctance of the previous president Quim Torra on the Catalan side. Now that it’s ERC carrying the baton, they’re confident it can be reactivated and move forward.

In parallel, the new Catalan president also plans to travel to Waterloo to talk with Carles Puigdemont. Likewise, contacts will begin to bring together the National Agreement for Amnesty and Self-Determination, part of the government agreement, which is intended to bring together the pro-independence political parties and the major pro-independence entities and representatives in civil society.

Apart from the independence process, among the first areas to be targeted by the Aragonès government will be the social rescue and economic reactivation plan. 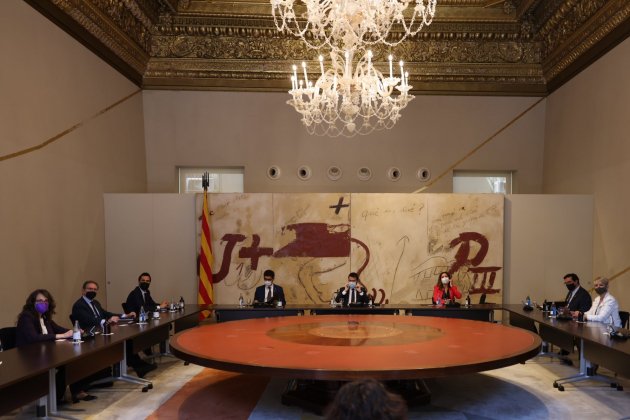 During Aragonès's appearance, and despite the major shake-up in the composition of the cabinet - with only two ministers repeating - the president declared himself "heir to the government that preceded us" and promised to provide "institutional continuity". In this regard, he highlighted the "good atmosphere" among all the new members of the executive and expressed confidence that they will continue to "work as a team".

In the main image, Aragonès, Puigneró and Vilagrà followed by the rest of the new government. / S. Alcazar