New demonstration called for Catalonia's Diada on September 11th by Donec Perficiam, the unilateralist platform created by former national secretaries of the Catalan National Asembly (ANC). Under the slogan "Enough traitors, independence now!", the organizers have called for a demonstration on September 11th at 4:30pm in Barcelona's Plaça de l'Ángel (on Via Laietana).

Thus, the Donec Perficiam demonstration intends to compete with that of the ANC, which has called its own traditional massive Catalan National Day rally to start just 45 minutes later, that is, at 5:15pm, in Plaça Urquinaona. In addition, the route that the ANC has planned from its meeting point is to go down Via Laietana - where they will meet up with those attracted by Donec Perficiam - turn along the Passeig d'Isabel II and continue along the Avinguda Marquès de l'Argentera until reaching the Parc de la Ciutadella, where the culminating event will take place on the Passeig dels Til·lers.

The Donec Perficiam organization, which until now had not convened any face-to-face events, wants to make "a step forward" with this demonstration in order to bring together "citizens who are willing to try again." The objective of the protest is "to denounce those who have betrayed the result of October 1st and make it clear that it must be implemented now, without delay." 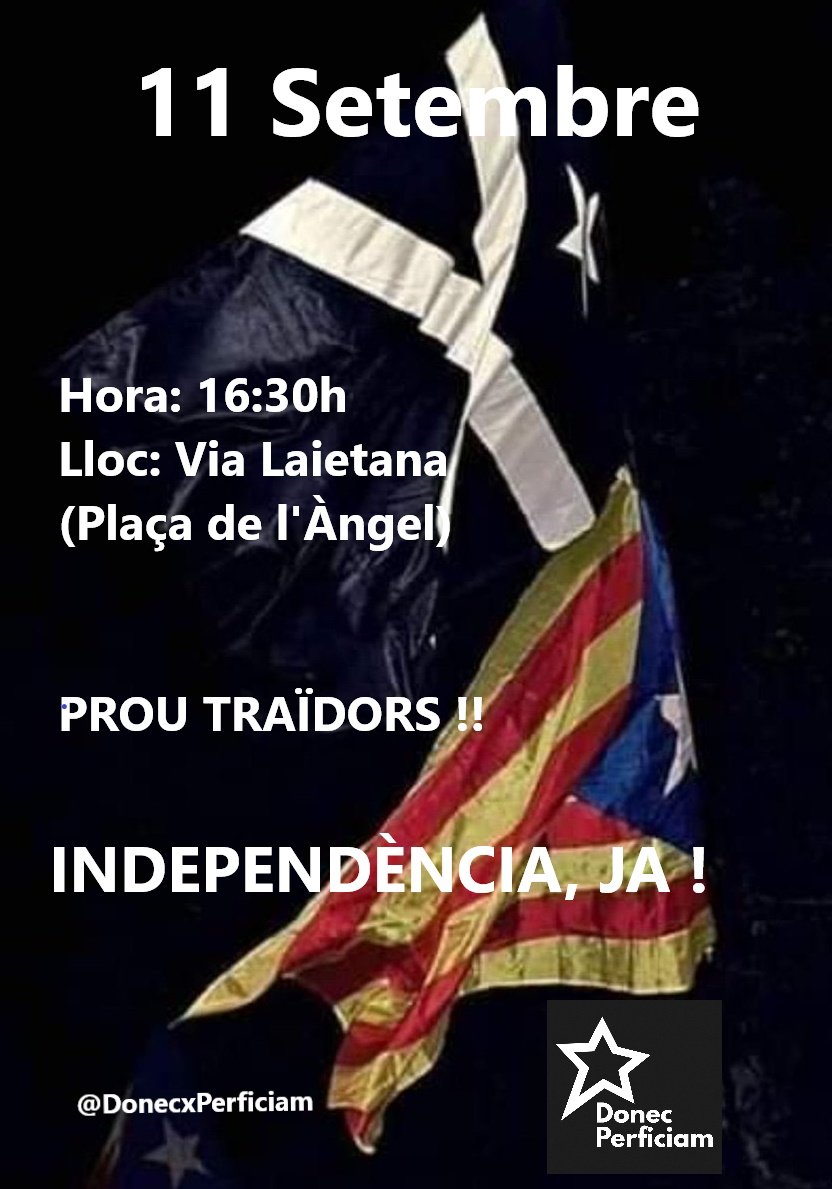 Poster for the September 11th demonstration called by Donec Perficiam

"The independence of our country, the achievement of a free and independent state, is not and will not be easy. Perhaps it will take sacrifices by a few for the benefit of all, reprisals, court cases and perhaps even worse things (something we do not want). What is clear to us is that the parties that are in the Parliament of Catalonia today will not do this. We must articulate a movement that is large enough, heterogeneous and with enough strength to prepare ourselves to configure a popular list, with leaderships that emerge from the bottom up, from people who want, are able and are willing to command it", they affirm.

Some of the former secretaries of Donec Perficiam, who belonged to the ANC when Jordi Sànchez was its president, gave their support to the critical letter published against the current Junt secretary general for having said that on 1st October 2017 he had more intention of forcing the Spanish state into a negotiation than of properly achieving independence.

Apart from the Donec Perficiam demonstration and the ANC march, two further groups have called events for September 11th. One has been called by the Crida Patriòtica, a platform promoted by the Front Nacional de Catalunya, which begins at 5pm in Pla de Palau. The other is organized by the the anti-establishment group Black Bloc Catalunya, at 8pm in the same place.