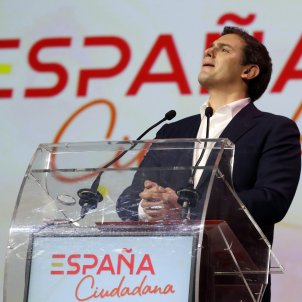 Albert Rivera has shamelessly plagiarised Donald Trump's slogan. The most xenophobic and supremacist US president of the last 50 years cultivated the lowest passions of the US population with the slogan "Make America great again". Rivera has this weekend proposed Levantar otra vez España (raise Spain again - in other words, Arriba España1). And where Trump attacked Mexican immigrants as the great danger, Rivera puts Catalan independence supporters in their place. It's unnecessary to note that the need to set out an enemy is the constant between authoritarian, or even worse, authoritarian political movements.

The independence movement would fall into the trap if it were to internalise any guilt complex over the accusations of a party like Ciutadans, which takes in former activists from the small xenophobic group Plataforma per Catalunya

It's important to take this drift into account because, surprisingly, there are independence supporters who, in good faith, are anxious about the attacks, especially those from Ciutadans, against president Torra, accusing him of being xenophobic and supremacist. In any political conflict, like the one Spain is confronting with Catalonia, the losing strategy consists of internalising your opponent's rhetoric. Because everything said by an opponent is only aimed at demoralising their adversary. The accusations against president Torra, based on half truths and whole lies, aren't aimed at the person, nor the politician, rather are used as a pretext to counter the democratic prestige which the Catalan independence movement has reached in the international media, to the point of revealing the authoritarian drift of the Spanish state.

The independence movement would fall into the trap if it were to internalise any guilt complex, when the constant which has historically identified contemporary Catalanism has been anti-fascism. And it would be quite stupid to feel questioned by a party like Ciutadans, which has had no scruples about taking in activists from the small xenophobic group Plataforma per Catalunya and other far-right organisations.

The history of Catalonia is a constant rebellion against absolutism and against the dictatorships, Primo de Rivera's and Franco's. Both dictators still have roads in their names around the Iberian peninsula, except for in Catalonia and the Basque Country. They're not only not bothered by the streets and avenues; PP and Ciutadans veto initiatives to remove Franco's decorations.

However, beyond that, Catalonia has been one of the countries which has welcomed the most immigrants in the least time, with hardly any conflict, throughout history. Currently, 10.5% of the Catalan population are immigrants from outside of Europe. No Spanish region has welcomed so many strangers at once and everyone knows that the influx of migrants is determined but something as important as the so-called "pull factors". The first immigrants advise the following ones who come to Catalonia because we don't live badly here.

As for president Torra, it's up to him to defend himself, but without forgetting that the best defence is a good attack. To apologise is to accept the blame and, when he talks about "the Spanish", it's perfectly clear that he's not referring to protesting retirees, or the young people with precarious jobs who can't leave home; he's referring to the dominant caste, the extracting elites who live off the government and who, much more viciously, have denounced people as innocent as Luis Garicano and César Molinas.

There is, today, no significant Spanishphobia in Catalonia, but goodness me the Catalanphobia you see under the shout of ¡A por ellos! (Go get 'em!), stoked by the highest judiciary of the state. And it must be said that Catalanphobia does have some Spanish tradition based in the right of conquest, which is the latent philosophy in all anti-sovereignty messages. Quevedo said it 400 years ago: "As long as there remains a single Catalan in Catalonia, we have to have enemies and war". General Espartero said it again in another way: "Barcelona has to be bombed every 50 years to keep it in line". Gonzalo Torrente Ballester theorised as such in defending the Catalan documents seized by the Francoist army remaining in Salamanca: "By just right of conquest". And now, as well as Felipe VI's speech, Federico Jiménez Losantos reminds us that "there are planes to bomb Catalonia". Is anyone apologising?

Translator's note: 1. Arriba España (Upwards Spain) was one of the most common Francoist slogans. 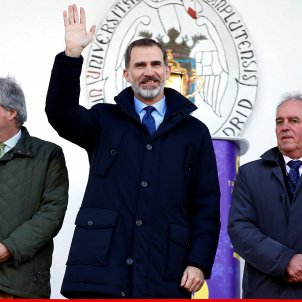