Pere Aragonès, let's do a sole

Following the explosive eruption of Roger Torrent into the TikTok universe, the communications geniuses of the Catalan Republican Left (ERC) disembarked on Instagram a few days ago with the video Aragonès sense filtres, a fascinating mini-documentary in which the current acting head of the Catalan government and ERC candidate for the next Catalan presidency shows what the pretentious refer to as "his most human side" as he walks through his native Pineda de Mar. Before Covid-19 burst into our lives, Pere Aragonès (Pineda de Mar, 16/11/1982) had become strong by adapting to the image of an efficient and besuited manager of the tranquil independence that Oriol Junqueras asked of him in order to calm the waters of the independence process and negotiate pardons for the prisoners with Pedro Sánchez in exchange for renouncing secession. Everything was going well enough until, damaged by the administrative ineptitude of ERC cabinet members Alba Vergés and Chakir el Homrani, Aragonès and his people suddenly had to change course to forget the management and at record-breaking speed humanize their presidential candidate in a campaign that for ERC seems interminable.

The video in question, it must be acknowledged, portrays him as a type who is artificial but trustworthy. Aragonès is an ERC politician who could very well be mistaken for a convergent, who walks with that penguin-like cadence of the young men to whom the Catalan matriarchs would marry off their daughters and who evokes the history of the fishermen's guild of his village as if the little boats were the Invincible Armada; you admire the candidate coming and going with his wife and daughter while the ladies in the village insist he must add to the family with a baby brother, keeping an eye on the offspring as the girl gets on "Paco's merry go round" and gently adjusting Junqueras's shirt collar before the Holy Spirit of Lledoners appears at a meeting in Badalona. When he walks around his village, remembers Aragonès with a smile of satisfaction, people don’t call him vice president, or candidate; only "Pere". This is what Aragonés is asking of us like a lunatic; that on 14th February we do not vote for the gentleman who manages all this boring autonomy stuff, but simply "Pere".

Even in the posed moments as the camera follows the candidate, there are moments when the artifice is magically undone. This happens when Aragonès visits his usual fishmonger's, looks at all the sea creatures great and small that are on sale before ordering, and with a certain air of the resignation of those who don't like or get sick of prawns, cocotxa or sea urchins, ends up saying to the fish lady: "Well, let's do a sole, yes." Special attention should be paid to the candidate’s face when choosing this fish of the order Pleuronectiformes, which, as Pla said, is especially loved by the English and French but much more mediocre than corb or red scorpionfish. "We'll do a sole, yes," says Aragonés, with the same soundtrack and defeated face with which the vicar leader of ERC might say "We'll ask for a new edition of the dialogue table, yes" or "Let's see if after the amnesty they give us a fiscal pact, yes”. This is the natural tone of his political possibilism: "Let's do a sole, yes", lest we should be so set on grilling a grouper that we end up with no fish at all.

This is the natural tone of his political possibilism: "Let's do a sole, yes", lest we should be so set on grilling a grouper that we end up with no fish at all.

No one can deny the sacrifice, hard work and obedience of the ERC candidate. When Junqueras ordered him to turn ERC into a convergent party without the three percent commissions, Aragonès raced off to be photographed with the establishment to become a respected figure among the Catalan elites, with the clumsiness of the newly-moneyed attending a party of tailored jackets. To survive and progress without making too much noise, Aragonés had learned in his own party, first in the Republicans' youth section, the JERC (there are photos that the current vice president must keep in the Bad Poetry drawer, from the days when he defended the "no" to the Catalan Statute and held up placards that read: "Every second Spain steals 450 euros from us") and then in Parliament, where he has vegetated since 2006 after a meagre working life which, like most current Catalan politicians, means he has not the slightest idea of how you make out an invoice, nor about making ends meet, nor dealing out wage packets.

This point of having built one's own life to a minimal extent should not have much to do with the construction of a new republic, an issue that, according to the Junquerist philosophy of love, is more to do with being a good person or, as the ERC electoral slogan puts it, to be "at the people's side." This is where Aragonès is now, having started his career with young rebels such as Uriel Bertran and Elisenda Paluzie and now spending the days leading up to the 14th February praying for the convergent vote to be split between JxCat and the PDeCAT to assure him enough of his “people” to win the Generalitat throne by a minimum. Pere goes to bed every day with this watery aftertaste of sole, not the sweet nourishment of the turbot or the fervent aggressiveness of the red mullets, longing for a victory, even if it is the narrowest, to be able to stand tall to tell the spirit of his grandfather, mayor of Pineda during the Franco regime, and his father, an independent Convergència town councillor in the same place, that now he has really grown up, and look, avi, papà, now Pere is a Right Honourable.

As the campaign progresses, Aragonès loses the scant glamour he had gained by being a serious contrast to Quim Torra’s incidents and banners, and once again shows himself as the politician who would sell his entire moral carcass to make a deal with Spain

It is curious how the realm of autonomous government makes all politicians look well-dressed. As the campaign progresses, Aragonès loses the scant glamour he had gained by being a serious contrast to Quim Torra’s incidents and banners, and once again shows himself as the politician who would sell his entire moral carcass to make a deal with Spain. In fact, when Rajoy's men in black touched down in the Catalan government to impose their direct rule under Article 155 (because Spain does keep its promises, not like our referendums) its leader Roberto Bermúdez de Castro was surprised by the administrative diligence of the Republican. He told Salvador Sostres this himself in a very funny interview in ABC, and allow me a verbatim quote: “Artadi and Aragonès were two admirable collaborators. They fulfilled all their duties promptly and diligently. It was a pleasure to work with them, for their availability and effectiveness." At home we already know, dear readers: when Catalan politicians mould themselves into efficient managers, they always end up in the service of the king.

I understand the anguish that the candidate must feel, because, really, if ERC does not win an election with the vote of its immediate rival fragmented, and with the only unionist opposition coming from a candidate like Salvador Illa, then it won't succeed in any parliamentary election from here till eternity. Worst of all, ERC thinks that the key lies in the lack of charisma in its campaign, in this language of resignation that defines its number one. Maybe it will help, I won’t deny it, although many independence supporters might also have been hurt seeing the current vice president mock the bold unilateralism which he himself took part in as a contrast with the convergent mediocrity shortly before 1st October. Because in ERC, they too failed to understand that this thing about la puta i la Ramoneta - the idea of having a nice face and an evil face - is not learned in two afternoons and that cynicism has a whole school and demands hard work that can't be learned by just anyone who tries to find a Tinder match. Aragonès knows all this perfectly, that’s why he prays that Borràs stumbles and that Illa cools down, because he knows that with autonomous government you have to keep your desires to a minimum.

Notice the nerves of the candidate, dear readers. We'll do a sole, yes. And be careful that you're not left with just some baby hake, Pere. Or with no fish at all. 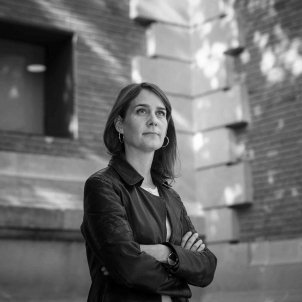 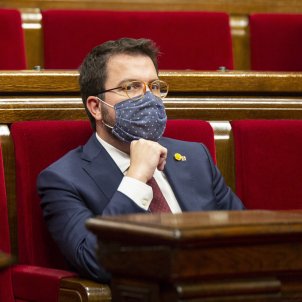 catalan presidency Aragonès: "After the removal of president Torra, Catalonia has no president" Marc González 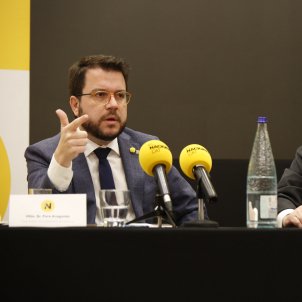 Dialogue Aragonès: "To persuade at the dialogue table, we need majorities at the polls" Carlota Camps 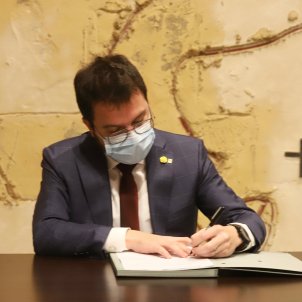