Vinton Cerf, one of the "fathers of the internet", wins Catalonia International Award 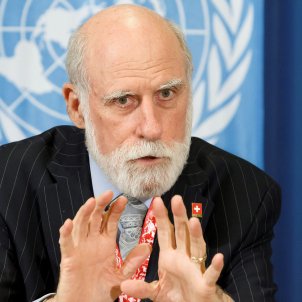 US engineer Vinton Cerf, considered one of the "fathers of the internet", has been bestowed the 30th Catalonia International Award. The jury's verdict was announced today by Catalan president Quim Torra. They had chosen from among the 109 candidates nominated from some 50 countries. The prize, which comes with 80,000€ (£72,000; $92,000), will be presented on 25th March. Cerf has confirmed he will attend the ceremony.

President @QuimTorraiPla: "The XXXth Catalonia International Award is for US engineer Vinton Cerf, for his contribution to the development of the Internet as a basic infrastructure of our society" pic.twitter.com/7b0rzatWQ2

The jury chose Cerf in recognition of "his contribution to the development of the internet as basic infrastructure for our society". According to president Torra, "Vinton Cerf's impartial and professional actions, free from outside influences, ended up being decisive for the attainment of the first domain for a language on the internet". Cerf was president of ICANN (Internet Corporation for Assigned Names and Numbers) in 2005 when it approved the .cat top-level domain. "The jury, recognising a technologist for the first time, wants to finally highlight Vinton Cerf's links with Catalonia," he said.

Founder of the Internet Society

Cerf, 75 years old, founded the Internet Society alongside Bob Kahn, and was its first president. The Society is a non-profit which aims "to promote the open development, evolution and use of the internet for the benefit of all people throughout the world". Cerf and Kahn were earlier responsible for TCP/IP, the communications protocols which underlie the internet and similar networks.

He graduated in Mathematics from Stanford University, later completing a master's and a PhD at UCLA.

During the 70s, he worked at DARPA (the US Defense Advanced Research Projects Agency), including on ARPANET, the precursor to the modern internet. This was one of the first projects to allow computers to communicate with each other using packet-switching, a technique that allows multiple connections to use the same communication link, crucial for the modern internet. Between 1982 and 1986 he led the engineering team behind the first commercial email service to connect to the internet.

Since 2005, he has been Google's vice-president and Chief Internet Evangelist. He spent almost a decade on ICANN's board, during most of which time he was its chair. He has been involved with NASA's Jet Propulsion Laboratory since 1998, working on InterPlaNet, a project working on the specific problems of creating a data network that can work across the distances involved in interplanetary travel.

Among his major previous awards are the Turing Award (the highest distinction in computer science) and the Presidential Medal of Freedom. He is both an officer of the French Légion d'honneur and a foreign member of the UK Royal Society. In 2002, he won the Prince of Asturias Award for science and technology. Among his many honorary degrees are doctorates from Rovira i Virgili University and Ramon Llull University in Catalonia and the University of the Balearic Islands.