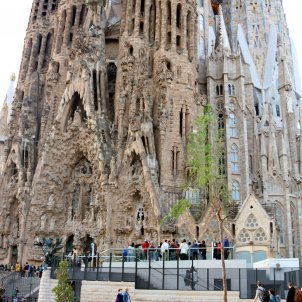 Three young men climbed part of the façade of Barcelona's Sagrada Familia earlier this month, escaping from the monument's security guards. Earlier this week they posted a 19-minute video apparently filmed early on the morning of 10th March on Youtube.

The video, posted by one of the participants on their personal channel, Ally Law, on the popular website, has been viewed over 300,000 times. They made the climb at night, whilst there were no tourists in the cathedral. Before the climb, they first film themselves in a flat in the city. Later, they are standing outside the Sagrada Familia, discussing their options. They say they waited an hour and a half to find the right place and moment for the attempt. Then the action starts. The three jump the security fence and start climbing the scaffolding surrounding the building; construction started in 1882, the current target completion date is 2026, the centenary of the death of its architect, Antoni Gaudi.

One of the three young men films their progress with a camera he's wearing on his front. Half-way through the climb, they realise that the cathedral's security guards have spotted them. At first they continue climbing, but, when two of the security guards start heading up in a lift to investigate, with their friend higher up, two of the men decide to hide on the scaffolding behind one of the building's columns. The lift passes within a couple of metres of them without them being spotted.

Above them, they hear the guards exit the lift and film them heading off to look for them. After debating what to do, they wait for their friend, who appears from above some time later and explains that the guards just missed him. At that point, dozens of metres up, they decided to abort their plans and head back down. We then see them climbing down back to their starting point and jumping the fence back onto the street.

At that point they realise that at least one of the security guards has seen them and appears to be speaking on his walkie-talkie, so they start running through the streets near the Sagrada Familia until they find a small park to hide in and discuss what they've just done.