Video: SNP leader in Westminster expresses "solidarity with our friends in Catalonia" 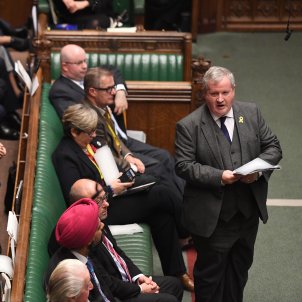 It's not the first time over the last few years that the topic has come up in the UK's House of Commons. Yesterday, the chamber officially started its new political year with the Queen's Speech. Before he began his response to the government's plans as outlined in that speech, however, there was another subject the leader of the Scottish National Party in Westminster, Ian Blackford, wanted to discuss: Catalonia.

"Before I begin my response to the Queen’s Speech, Mr Speaker, I am sure that you are aware of the news from Spain today that a number of Catalan politicians who have been arguing for self-determination, including a former Speaker of that Parliament, have been imprisoned," Blackford said. He was speaking just hours after Spain's Supreme Court sentenced nine civil and political leaders to between nine and 13 years in prison for sedition.

"It is right that politicians here and elsewhere around the world have the right to argue for self-determination", he said, adding that he was "proud" that his party's national conference had earlier that day, in Aberdeen, "passed a motion in solidarity with our friends in Catalonia". "We stand with the Catalans who have been imprisoned for standing up for the right of self-determination," he concluded.

That morning, Scottish first minister, leader of the SNP, had been one of the first international figures to react to the news of the Supreme Court's verdicts.