The Spanish police has this morning arrested two mayors of the left-wing CUP party, Ignasi Sabater, from Verges, and Dani Cornellà, from Celrà, both small towns in the north of Catalonia. They, and nine other activists arrested in the same operation, are accused of public disorder. Sabater was released around 1pm, Cornellà an hour later. They had all been released by 3pm.

A further four were arrested and released this afternoon, including a nephew of president Quim Torra and a photojournalist for El Nacional. The photojournalist in question, Carles Palacio, had in fact been covering this morning's events for this newspaper - his work illustrates this article. 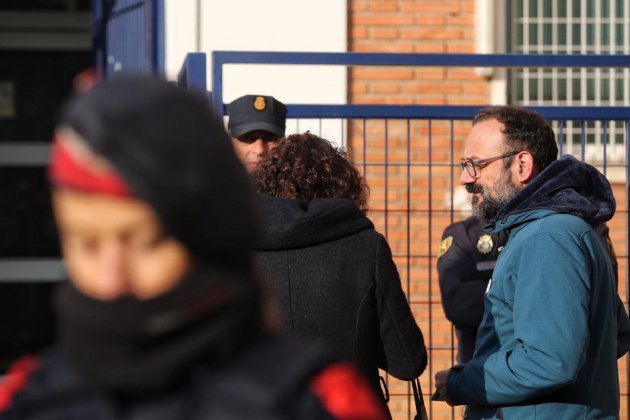 The mayors' lawyer, Benet Salellas, told Catalunya Ràdio that police officers were waiting for them both outside their homes this morning to arrest them when they left for work. They were taken to the Girona station of the Spanish police. The lawyer also said that, when he arrived there to meet his clients, the agent initially blocked him from entering until he spoke in Spanish, rather than Catalan, saying he didn't understand.

The two mayors are accused of public disorder, but Salellas says he doesn't know "either when the disorder took place, nor what events they're referring to". He added that "for these charges, they summons you to court to clarify the facts, they don't arrest you".

According to the High Court of Justice of Catalonia, they are police arrests, not ordered by a judge. The court says they are in relation to events early in the morning of 1st October 2018, the anniversary of the Catalan independence referendum, when some 400 people blocked AVE high-speed train lines in Girona for around two hours. Demonstrators gained access to the platforms by breaking a door, despite Mossos Catalan police and station security being present and trying to block their way.

Verges, in the spotlight

In recent months, Verges has suffered multiple attacks from fascists and the far right including graffiti and groups ripping down yellow loops and estelada pro-independence flags.

Last April, prosecutors investigated Sabater on charges of a hate crime and discrimination against "the Spanish nation and the corps of the Civil Guard" after he publicly denounced scores of cars having their wheels punctured overnight in his town.