Catalan president Quim Torra and Scottish first minister Nicola Sturgeon have met in Edinburgh this Wednesday, the first high-level meeting between the two governments in almost a decade. The two leaders talked about the independence processes in the two countries and defended Catalonia's right to self-determination with a referendum like the one held in Scotland in 2014.

In a joint statement, the leaders say they "discussed the challenging and complex political situation in Catalonia, and agreed that the way forward for Catalonia must be through peaceful and democratic solutions involving dialogue between the Spanish and Catalan authorities, respecting the right to self-determination of the Catalan people".

They also say that, in 21st century Europe, "issues of self-determination must ultimately be addressed through democratic referendums", giving the 2014 Scottish independence referendum agreed between Edinburgh and London as "the best example of such a process".

The two leaders met this afternoon at the first minister's official residence, Bute House. At the door were waiting pro-independence Catalans with posters in support of the political prisoners and estelada pro-independence Catalan flags. The meeting was "cordial" and "aimed at strengthening the ties of friendship between Scotland and Catalonia".

As he left the meeting, president Torra spoke to the media, repeating the main points in the press statement defending self-determination and a referendum. He also highlighted their commitment to tighten the cultural, social and economic bonds between the two historic nations. He said they will set up a working group to this end.

Today's meeting between Torra and Sturgeon is the first between the Scottish and Catalan governments since, in 2008, then-first minister Alex Salmond travelled to Barcelona to meet the then-vice-president Josep-Lluís Carod-Rovira. It's the first that's been held directly between the two presidents.

For the Catalan independence movement, Scotland is a point of reference for having achieved a referendum in agreement with the British government. Torra is proposing just such a referendum in his new talks with the Spanish government, although yesterday prime minister Pedro Sánchez rejected the possibility of Catalonia exercising its right to self-determination.

Former president Artur Mas met Nicola Sturgeon last April to discuss the political situation in Catalonia, Scotland and Europe. He thanked the first minister for her support of the Catalans' right to self-determination.

Torra is in Scotland to meet Sturgeon as well as minister in exile Clara Ponsatí. 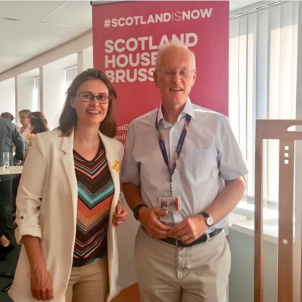 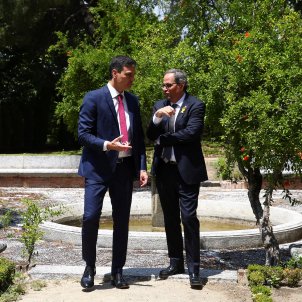 Sánchez-Torra Meeting Torra to Sánchez: "It's not enough to acknowledge the political problem" Marta Lasalas