The vehicle attack that took place in the German city of Münster on Saturday afternoon, leaving at least three people dead and dozens injured, was a case of "karma", according to the headline in Alerta Digital, a Spanish unionist newspaper.

Alerta Digital, known for its support for Spanish positions strongly opposed to Catalan independence, announced the attack in Münster with the headline: "Karma exists! A truck runs over a multitude in Münster (Germany) and causes several deaths and dozens of injuries". The insinuation made by Alerta Digital is that the Germans deserve this because their court did not extradite Catalan leader Carles Puigdemont, in a decision made on Friday.

At the same time, a large number of aggressive anti-German statements appeared on Twitter, celebrating the attack and relating it to the release of Carles Puigdemont. The tweet of the Münster tragedy which was published in Spanish daily El Mundo received numerous comments of this type.

Translation: They can go to hell, that has happened to them for releasing the Catalan dog

Others used the case to criticise German justice:

Translation: For sure, they'll release [the perpetrators] since there was no rebellion

Translation: The judge should let them go, there was not enough violence in this action.

The former president of leading anti-independence group Catalan Civil Society Josep Ramon Bosch also referred to the attack, even though he later erased the tweet. "Maybe this will be violence according to German justice?", he wrote. 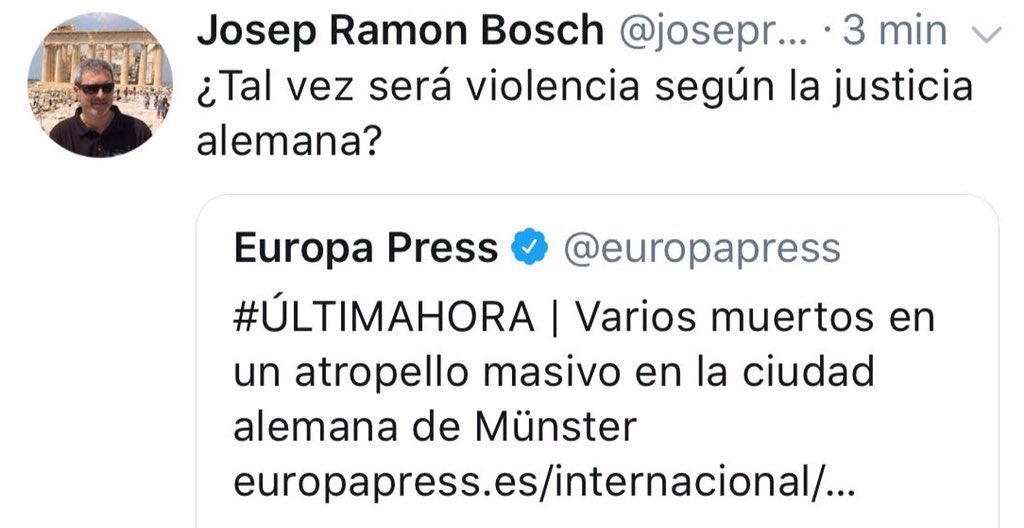