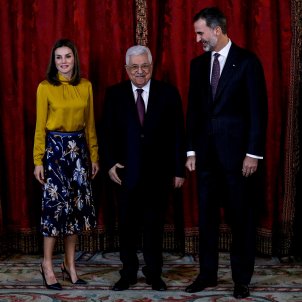 Spanish king Felipe VI has emphasised to the president of the Palestine National Authority, Mahmoud Abbas, that "there's no alternative" to "two democratic states" as a solution to achieving a "sustainable and lasting peace" in the Middle East and, "in the same way", respond to the "legitimate aspirations of both parties: Palestinian sovereignty and Israeli security".

During the toasts at the dinner offered at the royal palace by Felipe VI and queen Leticia in honour of the Palestinian leader, who today starts a visit to Spain, the king said he was "proud" of the Spanish Congress' decision to "urge its government to recognise the state of Palestine" and that he hopes that Spain carries this out "in the near future".

In front of around a hundred invited Spaniards and Palestinians, including leaders and representatives of the worlds of business, academia, religion, culture and media, Felipe said that "Spanish society has a profound sense of Justice which has led it show a special sensitivity to the legitimate aspirations of the Palestinian people.

"This has motivated a firm and constant position from Spain in favour of a solution of two democratic states, Israel and Palestine, living side-by-side in peace and within secure, recognised borders," he said.

The dinner was held in the Salón de Columnas, a symbolic space within the palace which held the 1991 Madrid Conference which tried to revive the Israeli-Palestinian peace process. Felipe referred to that conference to say again that "there is no alternative to Madrid's peace plan of two states", because Palestinian sovereignty and Israeli security are "two sides of the same coin" and "there won't be one without the other".

"And this will only be achievable if the necessary steps are taken to construct, under this approach and these aspirations, a climate of confidence and mutual respect", he warned, after reclaiming "the spirit of the Madrid Peace Conference" from the same room in which "26 years ago, the excitement of an historic peace between Palestinians and Israelis was born".

"Mutual trust is imperative" in a negotiation "which has to woven with good faith and ambitious vision", insisted the king, before expressing his confidence that reconciliation between Fatah, which governs the West Bank, and Hamas, in the Gaza Strip, will allow the Palestinian people to tackle "a new peace initiative" from a position of "unity", the results of which Spain is waiting for "hopefully".

As well as praising the institutions of the Palestinian National Authority as "capable and ready to direct the destiny" of their people, the monarch noted that the only regional forum which both Israelis and Palestinians take part in is the Union for the Mediterranean, born out of the so-called "Barcelona Process", whose objectives of security and prosperity are "a priority for Spain".

In his words of thanks, Abbas expressed his appreciation for the support of the king, the government and the Spanish people to Palestine's "just cause" and said that he hope that Spain will soon recognise Palestine as an independent state, so that it can live "side-by-side" with Israel "in safety, stability and good neighbourliness".

After supporting "the efforts" of Donald Trump's US government "to achieve an historic peace agreement", he expressed his belief that the EU will maintain "its attitudes of commitment to international law" and argued for progressing the reconciliation with Hamas to unite the land and the Palestinian people with "a single authority, a single legislation and a single security force".

Abbas invited the royal family to celebrate Christmas with him in Bethlehem. He also supported increased cooperation economically, politically, culturally and in terms of tourism and, as the Israeli president, Reuven Rivlin, did two weeks ago, made implicit reference to the Catalan crisis to guarantee his "firm attitude of support for the unity of the people and territory of Spain".

The speaker of the Spanish Senate, the presidents of the Constitutional and Supreme Courts and the mayor of Madrid were all also among those invited, along with the secretary general of the World Tourism Organisation, Taleb Rifai, the president of the Islamic Commission of Spain, Riay Tatary, and representatives of the business world like the president of CEPYME (Spanish Federation of Small and Medium Businesses), Antonio Garamendi.

As part of his first visit to Spain since December 2012, Abbas has met with the king in the Zarzuela royal palace and Mariano Rajoy in the Moncloa government palace, with whom he discussed international and regional affairs, including the inter-Palestinian reconciliation agreement. 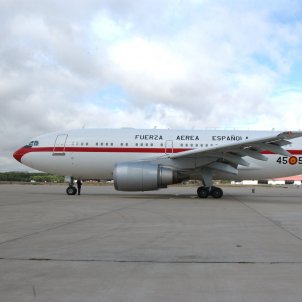 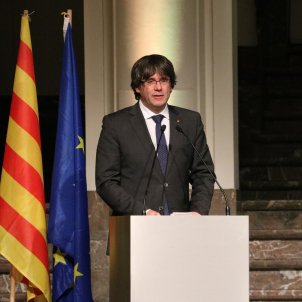 Catalan Republic Puigdemont: "The King has supported 'go get them' violence" El Nacional