Spain's far-right party Vox confirmed this Tuesday that the political group's second in command, the lawyer Javier Ortega Smith, has tested positive for coronavirus. Vox leader, Santiago Abascal, tweeted a statement announcing that his number two had tested positive for Covid-19. The party announced that it had told all its MPs to work from home and called on the Spanish Congress - where it has 52 representatives - to suspend its sessions.

But the consequences could go much further because this last weekend in Madrid's Palacio Vistalegre, the far-right party hosted a mass event with its membership. Said the party: "We believed that it would have been irresponsible to generate alarm by suspending a public event while the rest of the country continued running normally"

However, Abascal has admitted that it was a mistake and apologizes. The event drew about 10,000 people into a closed arena, and served to re-elect Abascal as party leader for another four years.

The party's press release blames the Pedro Sánchez government for not restricting the holding of mass events and for failing to close the country's borders. It also noted the presence of members of the government in the Women's Day march last Sunday, "wearing rubber gloves".

It is not known when Ortega Smith became infected, but last Sunday the Vox secretary general was frequently hugging and shaking hands with others, including Abascal. In the video below he can be seen coughing and wiping his nose with a tissue. 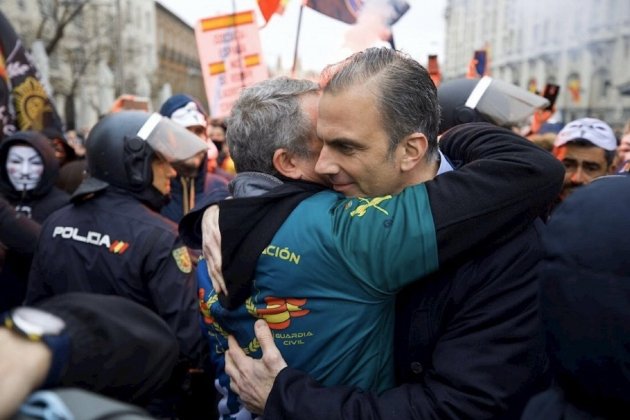 Despite its apologies, Vox blames Pedro Sánchez's government for putting its "agenda of propaganda ahead of the health of Spaniards." It also calls for the resignation of vice president Carmen Calvo "for her disastrous management" and calls on all parties to decree a "state of alarm".