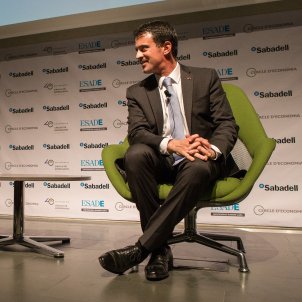 Spain's Círculo de Empresarios (Businesspeople Circle) has asked different companies of the Ibex 35 benchmark stock market index for money to help "cover the expenses associated" with events during Manuel Valls' anti-independence tour. The former French prime minister was the star guest of the dinners. The revelation came in an email sent in the middle of November signed by the organisation's secretary general, Jesús Sáinz Muñoz, with a copy sent to its president, Javier Vega de Seoane.

The email refers to two conferences, which later became debates, held this Monday, 11th December, the first in Madrid at midday, and the second in Barcelona in the evening. These fell in the middle of the campaign for the 21st December Catalan election. That same day, Valls also met Miquel Iceta, the candidate from the Catalan branch of PSOE, in opposition in Madrid, for Catalan president.

They are not the only events Valls will participate in. The former prime minister will finish his tour on Saturday in Barcelona at a meeting of the anti-independence Ciudadanos party, alongside the author Mario Vargas Llosa. He will then go to another debate, organised by the anti-independence organisation Sociedad Civil Catalana, with former PP minister Josep Piqué, moderated by Gloria Lomana, Piqué's partner and former news director for Spanish channel Antena 3.

To influence the election

The business organisation doesn't hide the fact that the aim behind inviting Valls is to influence the Catalan Parliament election in favour of the pro-union side. In the email, which El Nacional has a copy of, Jesús Sáinz explains that they consider it "extraordinarily important that Spanish citizens, and especially Catalans with a view to the regional election on 21st December, know [Valls'] opinion about the future of Catalonia as an integral part of Spain in the future of the EU".

Later they add: "We have the intention to take advantage of Manuel Vall's stay (...) for his statements to be widely spread in the media (...) particularly in Catalonia."

The circle's president, Javier Vega de Seoane, an active opponent of the independence process, was personally involved in the operation. The email reminds its recipient of a prior conversation with "Javier". It explains that they had covered "travel costs, the dinner [on] Sunday 10th with sponsors and a reduced number of invitees and the lunch (...) in the Casino de Madrid on Monday 11th". Those costs total "an approximate quantity of 40,000 euros [£35,000, $47,000]", according to the email.

Sáinz closes the message with a clear request. "I would be grateful if you would confirm your availability (...) to take part in such sponsorship and, if so, the quantity you would be willing to offer".

In the two events described in the email, Valls, in perfect Spanish, showed his unequivocal support for the pro-union case. He used the catalogue of alarmist arguments often offered by the Spanish government and the PP, PSOE and Cs parties to discredit the independence movement.

In the event in Barcelona, for example, a conversation before a business audience with Javier Solana, a former High Representative for Common Foreign and Security Policy at the Esade business school, Valls held nothing back. He alluded to the European nationalism of the 20th century to criticise the independence movement and warned that "if you mess about with nationalism, war is possible", a recurring idea in his speech.

The French politician, who was born in Barcelona, advocated for the pro-union parties to come out of 21st December "reinforced" and called for a "subtle pact between Spaniards and Catalans within the framework of the Constitution". Otherwise, "Spain will break up, but Europe too".

Among the audience were Catalan politicians Josep Antoni Duran i Lleida, Xavier Trias and Pere Navarro. The event was organised by Círculo de Empresarios and Círculo de Economía and sponsored by Banc Sabadell.

In the event in Madrid, Valls talked with Vega de Seoane, and used the same rhetoric. The discussion was moderated by Susanna Griso, a presenter for Antena 3, who interviewed Valls on her program the next day. 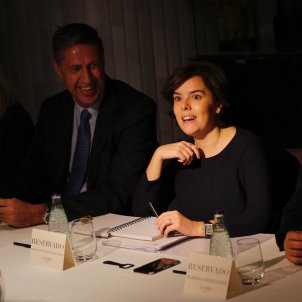 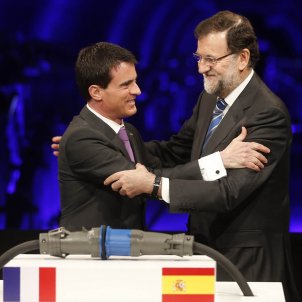 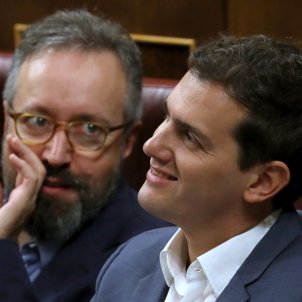