Spain, fourth-worst in EU in perception of judicial independence 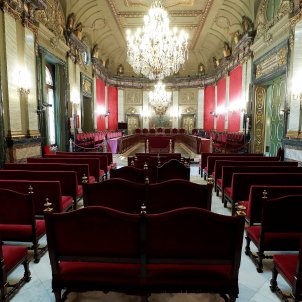 55% of Spaniards believe that the independence of their country's courts is "poor" or "very poor" according to figures released by the European Commission today. Only three countries in the EU got fewer positive responses than Spain in the survey: Bulgaria, Slovakia and Hungary. This puts Spain two places lower than last year on the same index, falling behind Italy and Slovenia.

78% of respondents believe that the government and world of Spanish politics "very much or somewhat" exercise pressure on the country's judges, above the European average. 74% believe there is interference from "economic or other specific interests". 52% don't believe that "the status and position of judges do not sufficiently guarantee their independence", which, unlike the other two, puts Spain below the European average.

In Denmark, Finland and Austria, over 80% of each country's population perceives their judicial independence as "good or very good".

Spain has also fallen on the ranking by the proportion of Supreme Court judges who are female. It is now second-last, ahead of only Malta, which has none. In Bulgaria, Romania and Latvia, they make up more than half of the judges of their highest courts.