The security operation to protect PM Sánchez in Barcelona

Almost 6,000 police officers will be deployed around Barcelona between this Thursday afternoon and Friday evening.

The operation for tomorrow's Spanish cabinet meeting and today's "mini-summit" between the Spanish and Catalan governments has seen a whole four police forces mobilised: Mossos d'Esquadra (Catalan police), Spain's National Police Corps, the Civil Guard and Barcelona's Urban Guard. They will all work together for the first time from a control centre there will be in the Catalan interior ministry. Also to be involved in sharing information in the control centre are the civil protection agency, the ambulance service and the transport agency. They have spent the last two weeks putting together the operation, which was being finalised today and which they've wanted to keep officially secret. 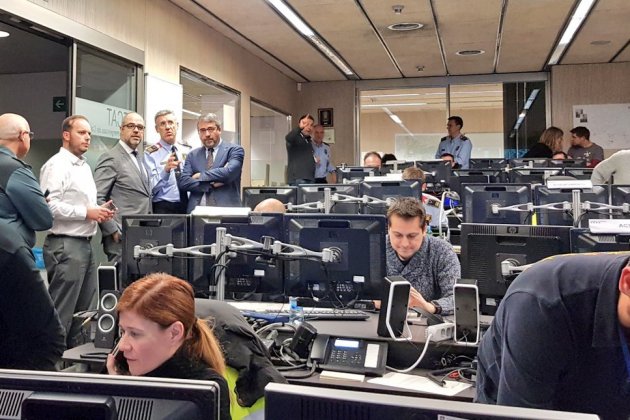 This afternoon, at Barcelona's Pedralbes palace, the Mossos d'Esquadra headed the deployment for the security cordon around the building. The convoy carrying the prime minister and his ministers arrived with a National Police escort, which also accompanied them to the Princesa Sofia hotel for a dinner held by the Foment de Treball business association. Police sources told El Nacional that, although they expected protests at both locations, they wouldn't "cause conflicts".

The Civil Protection agency recommended avoided driving into or out of Barcelona from this afternoon. It's expected that protests will tomorrow block the major routes into and out of the city, as well as other main roads around Catalonia.

On Friday it will be impossible to get near Barcelona's Llotja de Mar, the site of the cabinet meeting. There will be a double security cordon. 1,500 officers will secure the area from the statue of Christopher Columbus to almost França station, about a kilometre away.

The National Police will form the first line, closest to the Llotja de Mar, and will be responsible for protecting the ministers. In total there will be 500 Spanish police, including anti-riot officers. The second line will be the Mossos, 960 of them, including 400 anti-riot agents.

Also ready are the GEI (Catalan Special Intervention Group), to be deployed around the building with their quick-reaction vehicles, Tedax (bomb disposal), dog patrols to detect the presence of explosives, as well as units underground and in helicopters.

Around the city, the National Police will guard other official buildings as normal. Spanish police sources say that their normal presence will be extended to buildings linked to the military, treasury, Bank of Spain and all police stations. They add that their anti-riot officers will intervene if and when the Mossos request they do.

Mossos sources, meanwhile, say that they explain the main clashes to be out of Barcelona as protesters close main roads around Catalonia. They're deploying 3,500 officers to this end to monitor routes in and out of the city, access to the airport and train stations, and the main train lines and roads.