Relatives of Catalan political prisoners, others, denounce their cases in European Parliament 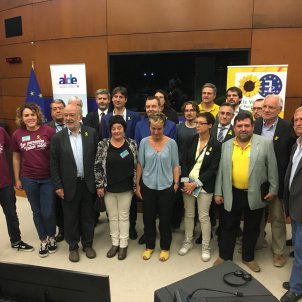 Relatives of the Catalan political prisoners have spoken out this Tuesday in Strasbourg, at the European Parliament, alongside family members of the Altsasu youths and the support group for the rapper Valtonyc.

The Altsasu group are eight young people facing charges of terrorism over a bar fight in which two off-duty Civil Guards and their girlfriends were injured. Prosecutors have asked for sentences of 50 years or longer for seven of the eight. Three of them have been held on remand without bail since 2016. Valtonyc is the stage name of rapper Josep Miquel Arenas Beltrán, sentenced to three and a half years in prison for his lyrics, charges including glorifying terrorism and insults against king Juan Carlos I.

The event, called "Defending fundamental rights in the EU: the case of Spain", was organised by eight parties: ERC, PDeCAT, Podemos, EAJ, Bildu, BNG, Catalunya en Comú and Izquierda Unida. It allowed the relatives to explain their personal situations and for some of the lawyers involved, like Andreu Van den Eynde, to give their legal perspective on the cases. It also allowed relatives of the Altsasu suspects and the rapper Valtonyc to raise the international profile of their cases.

The event comes on imprisoned former Parliament speaker Carme Forcadell's birthday and as ministers Raül Romeva, Dolors Bassa, Jordi Turull and Josep Rull come up on their 100th day behind bars. The others, Jordi Sànchez, Jordi Cuixart, Oriol Junqueras and Quim Forn, have all now spent over seven months in custody.

"The Spanish state is acting for revenge"

"The Spanish state is acting for revenge and not for justice". That was the comment from Anna Forn, daughter of interior minister Joaquim Forn, about the pretrial detention of her father and the other political prisoners. In a five-minute speech, which she noted was the same length as her father's calls from prison, Forn said that Spain is seeing "democratic regression" and called on the European Union to take a stand.

"The EU shouldn't allow a member state to act with impunity," she said. Forn also criticised the "arbitrariness" of the Spanish justice system's actions given its "capricious interpretation" of the Penal Code, expressing confidence in European justice instead.

Message from Romeva to his former colleagues

Riba, who also had an opportunity to speak during the event, explained Romeva's case and the violation of their children's rights to be with their father, as well as reading a letter from her husband. The minister, who was an MEP for ten years, denounced the situation he and his colleagues are facing, as well as those of the Altsasu youths and Valtonyc. He also called on the MEPs in attendance to denounce the situation.

An "attack" against the whole independence movement

Oriol Junqueras's brother-in-law, Francesc Riera, also spoke, describing Catalonia as suffering a "democratic regression in rights and freedoms" and saying that if their relatives "were in Belgium, Scotland, Germany or Switzerland they would be free". For Riera, the pretrial detention is an "absurd idea", an attack against the whole independence movement. He warned that the Spanish state has declared that "a whole Catalan government, more than half the Parliament and more than two million people form part of a criminal organisation".

Finally, lawyer Andreu Van den Eynde, who represents Junqueras and Romeva, gave a legal viewpoint on the situation, saying that when it comes to the imprisoned pro-independence leaders, "no procedural or legal guarantee is respected" and that people and not events are being investigated in what he described as a "general case".

"The interrogations about ideology are constant: how you vote, what you think, and above all whether you renounce your ideology. Those under investigation are repeatedly asked that", said the lawyer. He added that they have little confidence in the Spanish justice system and that it's probable that the case will end up at the European Court of Human Rights in Strasbourg, minutes away from the Parliament.

A number of the MEPs took part, like Ivo Vajgl and Mark Demesmaeker, who had heartfelt messages for the families, making it clear they're not alone.

Vajgl, president of the EU-Catalonia Dialogue Platform, said he feels "ashamed for how this Parliament is reacting to events in Spain". "It is time for this Parliament to react with more sensitivity", he said, before claiming that the aim of the process is to "humiliate the individual, break the individual, to make them feel bad, isolated and abandoned". "This should not happen in democratic Europe", said the Slovenian politician, who expressed "serious doubts" about democracy in Spain.

For his part, Demesmaeker insisted that the EU "should be a union of values", but that "this is what we see now disintegrating". "It is a shame", he concluded, telling the relatives of the prisoners that "you are not alone".

Also to speak were the famous French MEP and activist José Bové and Miguel Urban (Podemos), who denounced the situation and expressed their support to the families. 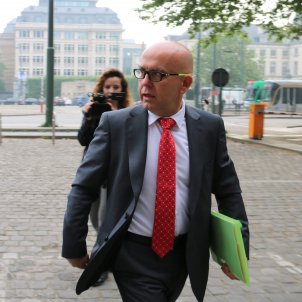 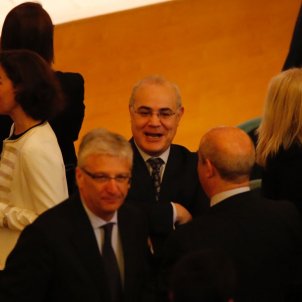