Rajoy: "A gentleman who has fled from justice cannot be president of anything"

With less than 24 hours until the planned investiture debate in the Catalan Parliament, Spanish prime minister Mariano Rajoy has said, on radio station COPE, that Carles Puigdemont is a "gentleman who has fled from justice, a gentleman who has unilaterally tried to erase national sovereignty and national unity" and that such a person "cannot be president of anything".

Rajoy made the comments whilst evaluating the Constitutional Court's warning that Puigdemont has to attend the Parliament in person this Tuesday if he wants to be invested president.

The head of the Spanish government said that the court's verdict is "very clear" and "has encouraged us all". Rajoy also emphasised that, whilst he is prime minister of Spain, he will fulfil the "duty" which, in his opinion, is "the most important": "to guarantee national unity". 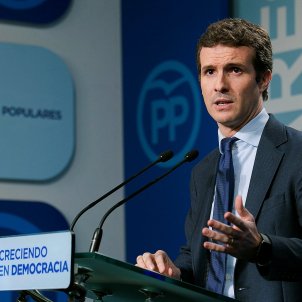 New Parliament PP warns Torrent: "He has two daughters and knows what awaits him" Estefania Molina