Catalonia has been present at the two-day European summit that started this Thursday in Brussels. Although the Catalan situation doesn't officially figure in the agenda, many of the leaders spoke on the issue entering the European Council. The Spanish prime minister, Mariano Rajoy, wanted to avoid Europe discussing the issue, to avoid the pro-independence leaders getting the European dimension to the conflict they're looking for, but in the end it leaked through into the Council. Rajoy did want European support, however, and got a lot to be valued, like that of Emmanuel Macron and Angela Merkel, but he will also leave with some setbacks.

The summit comes at a key moment in the independence process, with less than two days to go until the Spanish government holds an extraordinary meeting to decide how to apply article 155 of the Constitution, which would involve the full or partial suspension of Catalan autonomy. It also starts the same day that Catalan president Carles Puigdemont warned he will take a vote on independence to the Catalan Parliament if article 155 is enacted.

Many of the questions from the journalists waiting outside were about Catalonia. As such, many of the attending leaders made comments on the issue, like the German chancellor, Angela Merkel, French president, Emmanuel Macron, and the prime ministers of Belgium, Charles Michel, Luxembourg, Xavier Bettel, Slovenia, Miro Cerar and the Netherlands, Mark Rutte. 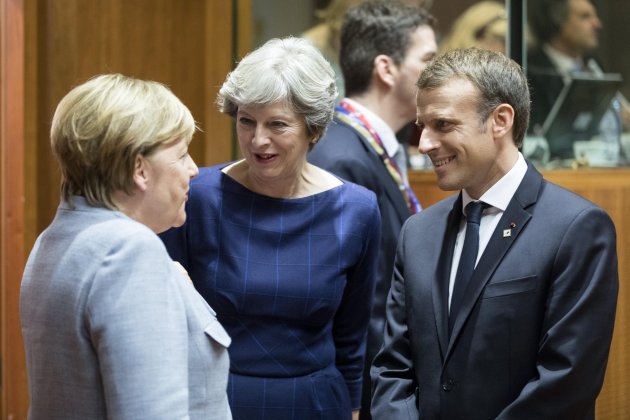 Mariano Rajoy, present at the meeting, was hoping for the support of his European partners and, in part, he received it, although he also received some setbacks. The most important, that the German Permanent Delegation to the EU included Catalonia in their tweet about the meeting's agenda. A surprising inclusion, and a diplomatic reversal for Spain, since Catalonia was not initially in the agenda. Nonetheless, in a press conference after the council started, the body's president, Donald Tusk, said that Catalonia wasn't on the "official" agenda and wasn't expected to be under discussion.

Nonetheless, German chancellor Angela Merkel closed ranks with Rajoy. As she arrived at the meeting, Merkel called for a solution to the conflict "based on the Spanish constitution". She also said that she supports Madrid's position on the conflict and noted that the Spanish government has the support of the main Spanish political parties. After discussing the day's agenda, Merkel answered only one question, over Catalonia.

Belgium and Luxembourg, two of the EU's founding members, on the other hand, deviated from what has up till now been the official script. The prime minister of Luxembourg, Xavier Bettel, said that "the EU cannot ignore the Catalan crisis", a message that clearly breaks from the rhetoric of the European institutions, which aim to avoid assessing the situation in Catalonia, and which goes against Rajoy's strategy of keeping it as an internal matter. That said, Bettel also criticised the organisation of the referendum by Catalan authorities, saying that the law and the Constitution "have to be respected".

Neither has Spain liked Belgium's position. Just this morning, a Belgium newspaper published a strongly-worded message to the Belgium ambassador to Madrid. The letter was leaked by someone from the Belgian diplomatic service, just however before the country's leader was to meet Rajoy at the European Council, something which surely will not have pleased Madrid.

What's more, the prime minister's comments as he entered the meeting will not have helped. Charles Michel, far from softening the disagreement, defended his earlier statement, in an interview with the newspaper Le Soir on Saturday, he said that if dialogue between Catalonia and Spain fails, he would support European or international mediation. Madrid, however, continues to refuse such a possibility. Michel has also repeatedly condemned the violence during the 1st October referendum.

The prime minister denied that his words have created a crisis between Spain and Belgium, but the coolness with which Rajoy greeted the Belgian leader at the Council suggests otherwise. When taking his place at the table, between Sweden and Belgium, he greeted the Swedish leader first and then quickly greeted Michel, barely making eye contact. An unusual situation, since normally they would greet each other and talk a while. Rajoy, however, decided to turn his back.

France and the Netherlands, with Rajoy

The person Rajoy did get clear, explicit support from was French president, Emmanuel Macron. He said that the European summit would be marked by a "message of unity" from the countries of the union towards Spain. "This council will be marked by a message of unity, unity around the member states facing the crises they might meet, unity around Spain and unity (...) in the discussions about Brexit," said Macron as he arrived.

Rajoy also held a bilateral meeting with Macron. The Spanish president wanted to avoid the question of Catalonia coming up on the official agenda, but want such bilateral meetings with European partners to reinforce support. 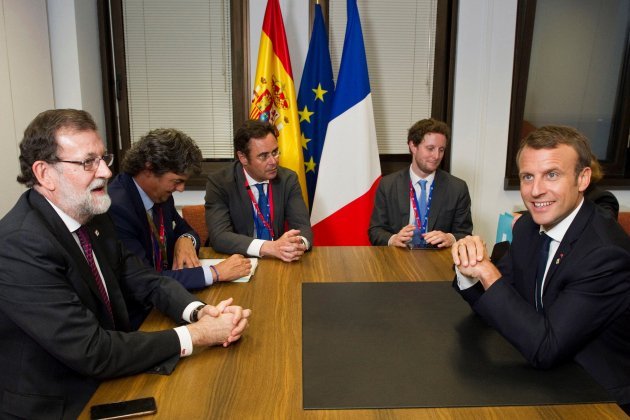 Mark Rutte, Dutch prime minister, also supported the decisions Rajoy has taken, saying that they agree with the opinion of the Constitutional Court. He avoided speaking further, believing it to be "an internal Spanish matter".

For his part, the Slovenian prime minister, Miro Cerar, said that his country's independence from Yugoslavia 26 years ago is not comparable to the Catalan situation, although he understands that the issue is being seen "emotionally" from his country. As such, he called for a peaceful solution to be found within the Spanish constitutional system. Cerar, it should be noted, is also under pressure from his Parliament which, in a debate over Catalonia, passed a motion supporting self-determination.