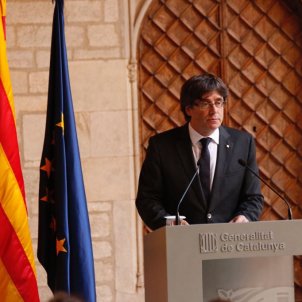 Catalan president, Carles Puigdemont, has finally decided to drop plans to dissolve the Catalan Parliament and call early elections given the refusal of the Spanish prime minister, Mariano Rajoy, to stop the intervention in Catalan autonomy planned via article 155 of the Spanish Constitution. "It's up to the [Catalan] Parliament to move ahead with whatever the parliamentary majority decides in relation to the consequences of the application against Catalonia of article 155," said Puigdemont today.

The president made the announcement from the Gothic gallery of the Catalan government palace in a speech this afternoon. Puigdemont started by assuring that, as president, he has the responsibility to exhaust all possible paths to find a negotiated, agreed-upon solution to the political, democratic conflict.

The president was speaking some four and a half hours after the time that had been initially announced, after Rajoy's refusal to drop article 155, which caused him to double back on his initial plan to call elections.

"They know that I've been prepared to call elections as long as they give guarantees of absolute normality. There is not one of these guarantees which would today justify the calling of elections to the Catalan Parliament," he said.

As Puigdemont read these words, shouts of joy could be heard from the crowd gathered outside in the plaça de Sant Jaume.

Following the speech from the front row were the minister for the Presidency, Jordi Turull, Interior minister, Joaquim Forn and Territory minister, Josep Rull.

The president said that his duty was to try to avoid the impact of article 155 on the institutions of Catalonia as planned by the Spanish cabinet. He described the use of the article as "outside of the law, abusive and unjust, looking to wipe out not only the independence movement, but the whole pro-Catalan tradition that has carried us to this point".

"I do not accept these measures, because they're unjust and because they hide, almost without disguising it, the vengeful intention of a [Spanish] state which saw itself defeated on the 1st October", he said, referring to the independence referendum.

Puigdemont also accused the Spanish state of not planning to stop its repression, nor of ensuring violence-free conditions for the holding of possible elections, although he tried to earn these guarantees.

He said that he had worked in accordance with his responsibility and with respect for the different options that had been proposed. "But this hasn't earned, once more, a responsible answer from the PP [Popular Party], which has taken advantage of this option to add tension at a moment which requires deescalation and dialogue," said the president.

The president expressed his regret that recent events show that responsibility is only demanded of one side, whilst the other is allowed to act with "absolute irresponsibility". "It's the logic of politics carried out on the basis of the logic of a por ellos [go get them], instead of one based on con ellos [with them]."

The president didn't hide the challenges of the current moment and made a call for calm. "Catalan society, mobilised, has led us to this point based on participation, commitment and calm, also based on responsibility. I've tried to have this same commitment and calm. Everyone has their own responsibility. Mine, as president, was to exhaust to the last all the options that I had", said Puigdemont, after repeating that at every moment he has acted peacefully and with civility.

"In these hours that present themselves to us, the commitment to peace and civility needs to be kept more firmly than ever. Only in this way can we end up winning," he said.

In these last hours, before my power expires to call elections in the Parliament as a result of the entry into force of the measures proposed by the Spanish Government in application of 155, I considered the possibility of exercising it and calling elections. It is my call and diverse people have asked me these days if I thought to exercise it or not. My duty and my responsibility is to exhaust all ways, absolutely all, to find a solution that is dialogue and agreed upon in a conflict that is political and is of a democratic nature. I have been willing to call these elections as long as there were guarantees that would allow it to be held with absolute normality. None of these guarantees exist that justify today the call of elections to the Parlament. My duty was to try honestly and loyally to avoid the impact on our institutions of the application of Article 155 as approved by the Council of Ministers and approved in the Senate. It is an unlawful, abusive and unlawful application that seeks to eradicate not only the sovereignism but all the tradition of Catalanism that has brought us here. I do not accept these measures, because they are unfair and because they hide almost without concealing the vengeful intention of a Spanish state that was defeated on the October 1st referendum.

Nor is there any intention to stop the repression and to seek conditions of absence of violence in which possible elections would have to be celebrated.

I have tried to obtain these guarantees. I believe I have acted in accordance with my responsibility and with the feeling of people of different sides that has been raised. But this has not once again achieved a responsible answer from the Spanish Government, which has taken advantage of this option to add tension at a time when what is needed is maximum relaxation and dialogue.

At this point, and naturally without having signed any dissolution decree calling for elections, it is up to the Parliament to proceed with what the parliamentary majority determines in relation to the consequences of the application against Article 155 of Catalonia.

No one will be able to reproach the Catalan side for dialogue and political will. No one will be able to say that I have not been willing to sacrifice to ensure that all facilities for dialogue are put in place. But once again we find, with much disappointment, that responsibility is only demanded and pressured on one side, and others are allowed their utter irresponsibility. It is the logic of a politician made up of shouting the "go get them" instead of one based on "go with them".

The mobilized Catalan society has led us here based on participation, commitment and serenity, also in responsibility. I have tried to have in my presidency and in these days that we have left to finish the road this same commitment, this same serenity, each with its responsibility. Mine as president was exhausting all the options I had in hand. Catalan society has always done this, like this government, invoking peace and civility, militating in peace and civility. It is necessary that in these hours that we are presented the commitment with the peace and the commitment with the civism they remain more firm than ever because only in this way, and underline, only in this way, we will be able to finish winning. 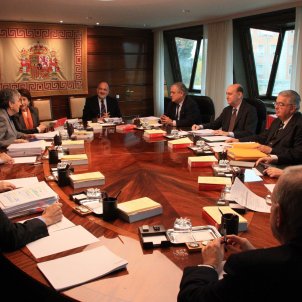 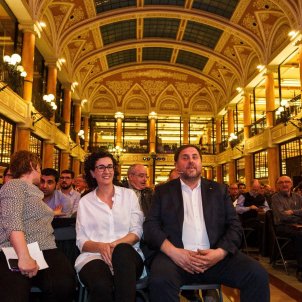