The order to Spain's consul in Scotland: "Catalan presence must be totally prevented"

The Spanish consul to Scotland, Miguel Ángel Vecino, had a very clear instruction: "Catalan presence must be totally prevented". He was given the order by the foreign ministry in November 2018, as they also reminded him that his role was "fundamentally political". "Catalan presence" included anything, including a cultural presence, like participation in a film festival.

The orders are included in the lawsuit Vecino has filed against the ministry over his firing, which El Nacional has seen. He was removed from his post in June after it emerged he had told first minister Nicola Sturgeon that Spain wouldn't veto the entry of a hypothetically independent Scotland to the EU. The official explanation was that he "had overstepped his role because a consul has no political function". The lawsuit filing includes 80 annexes of documentation.

Before taking up his new post, on 18th October 2018, Vecino dined in the restaurant El Soportal in Madrid with Camilo Villarino, Borrell's chief of staff. The meal was a chance to give him his instructions; Villarino warned that Scotland was the "principal refuge and [source of] support for the Catalan secessionists". As such, according to the lawsuit, "the minister was very interested in everything happening in Scotland and [the consul] had to carry out a fundamentally political role, with the aim of trying to end with the protection the secessionists enjoy in Scotland." 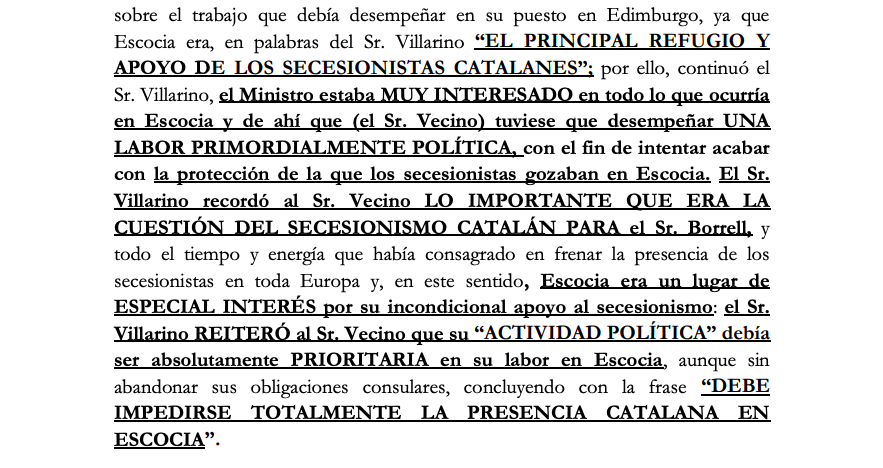 During that meeting, Villarino insisted that his "political activity" had to be "an absolute priority". According to the lawsuit, the consul asked the chief of staff to clarify the phrase "all Catalan presence". The answer was clear: "Well all, without exception, because we cannot risk secessionists sneaking past us." During the same dinner he also ordered Vecino to "monitor" the activities of Basque pro-independence party PNV, who they didn't "trust a jot", as first reported by Vozpópuli.

Asked why the ambassador wasn't responsible for this, Villarino said that Carlos Bastarreche, Spain's chief representative in London, is a "very special person" who doesn't accept orders from anyone and who "hates everything that's nationalist, either Catalan or Scottish". In three years in the UK, he had apparently never even left London. He'd never, for example, paid a courtesy visit to the Scottish first minister, "who he disdains", nor had he been to Wales or Northern Ireland.

Following that dinner last year, the consul also met Jorge Romeu, entrusted with the Catalan portfolio within Borrell's office. He repeated the same message as Villarino and said Vecino shouldn't hesitate to call him whenever necessary, because stopping and "even eradicating" the pro-independence presence in Scotland was "an absolute priority".

He justified the increase in political activity by the former passivity: "During the PP era nothing's been done. I was at the Moncloa [government palace] and Rajoy didn't care at all about what they thought about Spain abroad and limited himself to saying that 'they can say whatever they want, they'll get bored soon'," Romeu said. He continued: "But we cannot go on like that and the minister [Borrell] believes that fighting nationalism is a priority of his foreign policy and that Scotland is a key part of his strategy."

Not even film festivals

Already in Edinburgh, in December 2018, Vecino tried unsuccessfully to get in touch with Romeu to discuss a "film festival Catalonia was taking part in". Given the instructions he had been given two months earlier, he wanted to confirm that preventing "all Catalan presence" extended that far. The eventual answer was that there was "no exception" because it was "impossible to know where the secessionist movement could attack from" so they had to be "prevented in all facets".

As first reported by Voxpópuli, and is confirmed in the lawsuit, the foreign ministry also managed to block a visit by the Catalan Parliament to Scotland one month before April's Spanish general election. Borrell's department learnt via "classified information" that Josep Costa, the deputy Speaker, as preparing a trip during the trial of pro-independence leaders in Madrid. Spanish authorities pressured their Scottish counterparts, arguing it was inappropriate during the election period.