A judge has accused the editor of Catalan weekly newspaper El Vallenc, Francesc Fàbregas, of three counts relating to the 1st October independence referendum: disobedience, perversion of justice and collaboration with the misuse of funds. The editor was summoned to appear at 8 this evening a the Civil Guard's station in Tarragona, southern Catalonia, where he called on his right to remain silent.

Meanwhile, outside the police station, some 200 people gathered in support of the editor, responding to calls from the pro-independence organisations Catalan National Assembly and Òmnium Cultural and the political parties ERC (Catalan Republican Left), PDeCAT (Catalan European Democratic Party) and CUP (Popular Unity Candidacy). Many of the protesters carried signs and placards in favour of independence, democracy and the referendum. They also brought a ballot box with which they simulated a vote and shouted pro-independence chants. 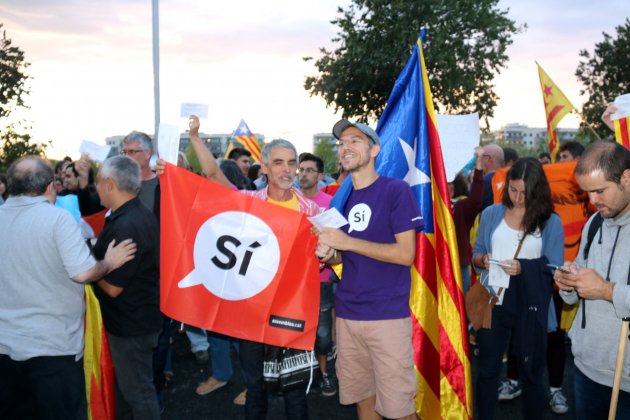 Fàbregas entered the police station at 7:50pm accompanied by his lawyer around 5 hours after the offices of his newspaper were searched. The reason for the search is unknown, being under an injunction.

The editor denounced the search saying that "there's no right [for it] because we've committed no crime and they've treated us like criminals". "They say that we've made some voting slips but they haven't taken anything because they haven't found anything," he added.

Four Civil Guard agents entered the paper's premises in Valls, west of Barcelona, around 11:30am and had a roughly 3-hour-long meeting with the editor. Meanwhile, a dozen other agents guarded the offices, protested by hundreds of members of the public. The agents finally left shortly before 3 this afternoon.

Independence Process Protesters wave off the Civil Guard: "Have a good time and thank you very much" El Nacional