15 MEPs protest "Misuse of the European Arrest Warrant" against Puigdemont

15 MEPs from nine EU states have this Wednesday denounced what they see as the "misuse" by Spain of the European Arrest Warrant system in Catalonia. In a question to the European Commission, the MEPs ask how they "envisages to avoid [sic] an opportunistic use" of such warrants in the future, as they believe took place in the case of Catalan president Carles Puigdemont and the ministers with him in Belgium.

The MEPs ask whether this "misuse" of the system might "affect the mutual trust among the judicial systems of Member States and its effectiveness". They also ask whether they "should be allowed to be withdrawn or presented at will". 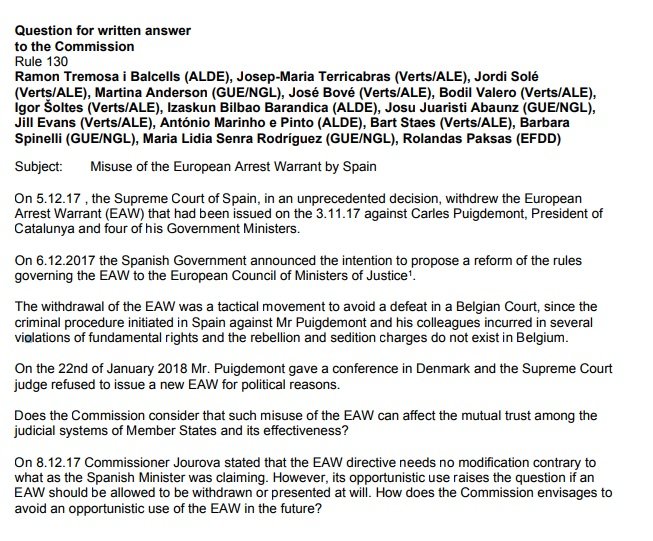 "The withdrawal of the EAW was a tactical movement [sic] to avoid a defeat in a Belgian Court", say the MEPs about Spain's Supreme Court deciding to stop the process to extradite Puigdemont. They also note that, following the case, the Spanish government planned to propose modifying the rules, a change that Commissioner Věra Jourová said was not needed.

The written question, spearheaded by Catalans MEPs Ramon Tremosa (PDeCAT), Jordi Solé (ERC) and Josep Maria Terricabras (ERC), received support from MEPs from Northern Ireland, France, Sweden, Slovenia, Wales, Portugal, Belgium and Italy, as well as Izaskun Bilbao and Josu Juaristi from the Basque Country and Lídia Senra from Galicia. Among the signatories are the daughter of one of founding fathers of the EU, Barbara Spinelli, and the notable French green leader, José Bové.