The authoritative UK business weekly The Economist warns that Algeria's decision to cut its natural gas supply to Morocco could "hurt Spain too". Under the title 'Things are heating up in Western Sahara', the publication highlights the desert dispute between these two countries that have maintained their rivalry in a decades-long conflict centred on the Polisario Front, which it refers to as "a nationalist movement seeking independence".

As an example, The Economist notes that, in the last year, Morocco has registered with the UN more than a thousand "incidents" of its units being fired on. The Polisario says it has staged more attacks than that along the "world’s longest frontline—a 2,700km (1,700-mile) wall of sand, or berm, built by the Moroccan army and sown with mines" but also claims that Morocco is responsible for about two dozen deaths, including both soldiers and civilians.

Looking at the economic terrain of the war, the main route of entry of Algerian gas into Europe is via a Spanish state that is "in the midst of an energy crisis" with prices rising. And the weekly reiterates that the Pedro Sánchez government "has been forced to try to adopt a series of measures to minimize the impact on consumers." The closure of the pipeline through which Algeria sends most of the gas it exports to Spain could end up turning the Spanish government into a "collateral victim."

Why does it not affect other European countries?

The decision to cut this supply route has been taken by Algiers and affects only the Maghreb–Europe Gas (MEG) Pipeline that reaches Spain through Moroccan territory. To stop the flow-on of the closure to Europe, Algeria reiterates its commitment to the alternatives: firstly, sending gas to Spain via the second pipeline connection it has across the western Mediterranean, the Medgaz Pipeline, as well as in the form of liquefied gas by ship. Nevertheless, it is stressed that the crisis has raised fears that Spain could see its gas reserves compromised or reduced, or that it will have to pay more for its needs in a European environment of rising energy costs and supply doubts, which come on top of domestic tensions due to the already significant increase in the electricity price in Spain, which, in turn, could rise even more with this crisis.

Since this January, the Medgaz pipeline, between Beni Saf, in Algeria, and Almeria, in Spain, has had an expanded transmission capacity. The expansion project was based on the installation of a fourth turbocharger. The Medgaz company, owned by Algeria and the Spanish multitnational Naturgy, operates the submarine pipeline.

The article in The Economist is the latest foreign news outlet to look with concern at the portents for a serious Spanish crisis. Last week, The New York Times stressed that Spain is facing a significant reduction in its natural gas supply. The US newspaper highlights in a report by Raphael Minder how quickly "the geopolitics of energy" can change following Algeria's decision to suspend the supply of gas through the MEG pipeline crossing Morocco.

For its part, France Info points out that Algeria is turning off the tap in Morocco and "Spain is paying the price". The French broadcaster compares Algeria with Russia in the strategy of using this natural resource as a method of pressure: "Since 1996, Morocco has been a transit country for Algerian gas, exporting to Spain and Portugal and supplying 10 billion cubic metres annually. At a time when gas prices have skyrocketed, Algerian president Abdelmadjid Tebboune has ordered a stop to the renewal of the pipeline contract with Morocco in protest at what Algiers considers hostile practices by its neighbours, and with the Western Sahara controversy underlying the situation".

As well, the UK agency Reuters reports that the Spanish minister of energy transition, Teresa Ribera, says that "Spain has 43 days of gas reserves after the closure of the pipeline," thus putting some actual numbers on the countdown faced by Sánchez to find an alternative.

The seeds of the crisis go back a long way. This weekend, as the Morrocan embassy to Madrid has noted in a tweet, marked the 46th anniversary of "the glorious Green March that culminated in the recovery of the Moroccan Sahara that heads the permanent pact uniting the crown and the people in the unity of the nation".

The so-called Green March marked an unarmed Moroccan invasion of parts of the former Spanish colony of Western Sahara, which was in turn the subject of a confused pact with Spain as the European country withdrew its colonial presence in the last days of the dictator Franco's rule. Since 1963, Western Sahara has been regarded by the United Nations as a non-self-governing territory with a right to decolonization. 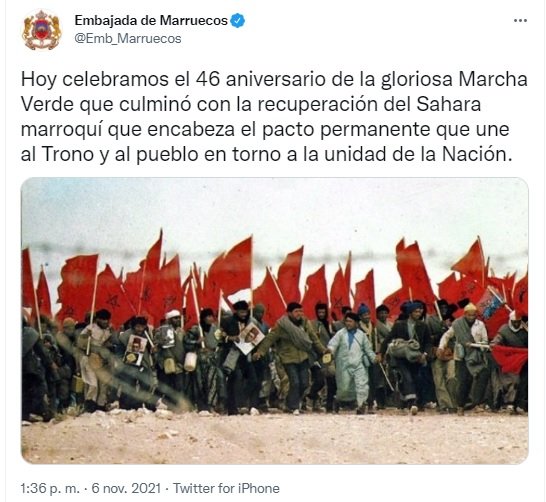