The Basque Nationalists' word and their pact with the PP

First lesson. In politics, someone's word is worth what it's worth and, in these current times, it's worth ever less.

Second lesson. Lord Palmerston was the first to coin the phrase: As nations, "we have no eternal allies, and we have no perpetual enemies. Our interests are eternal and perpetual".

Third lesson. Political Catalanism has historically been fascinated with Basque nationalism. They've also had a love-hate relationship, where agreements and disagreements have grown a political distance between the two sides, which has been hard to correct for a long time.

Fourth lesson. In Spanish politics, the EAJ (Basque Nationalist Party) has demonstrated that, for the moment, if you'll forgive the expression, it's the damn boss.

Neither the inhuman and unjust pretrial detention of a significant portion of the Catalan government fired by Mariano Rajoy and various leaders of the independence movement, nor the exile of the other half of the Catalan executive, nor the solemn promise to not approve the Spanish budget if article 155 of the Constitution which has suspended Catalan autonomy wasn't lifted first, nor a library of news stories, audio and video overflowing with apparently sincere statements have influenced the EAJ to move towards the positions of the Catalan independence movement. The EAJ has prioritised an agreement worth millions to splash around Basque territory. It's got Rajoy and Montoro's wallet out and in that there's nothing to say. On other occasions, Catalan nationalism has done the same and it cared little what EAJ would think and the harm it could end up having for a bilateral negotiation.

But, at least seen from Catalonia, this time was different and both sides were obliged to leave aside their old insults and quarrels. In the middle are political prisoners, an emergence of the far-right as has never been seen before in Catalonia, cutbacks to freedoms and, above all, their word when nobody had asked the EAJ for such strong public statements. Mariano Rajoy now has his budget in a key year, being in the middle of the legislature. In fact, with this political agreement, it can easily complete its four years. On the other hand, as regards the Catalan independence movement, maybe its leaders will now learn some of the four lessons above. The fact that many of them are new shouldn't make them forget that history is cyclical and that almost everything happened before or will happen again. In time. 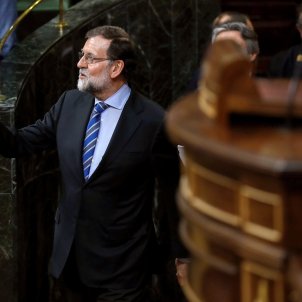