Iu-Tuber on campaign: members of the public talk live with president Puigdemont 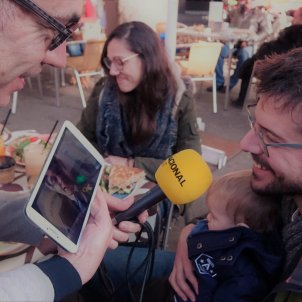 It's midday on a Tuesday in December 2017. A Tuesday which is the last day of the Catalan election campaign. Imagine that you're walking along the street and a guy comes up to you and says: "If you were in front of the president of Catalonia and could ask him a question, do you have one in mind?"

Now, imagine that the guy who says this shows you a tablet with the president live from Belgium. What would you ask him? And, above all, what face would you make?

Well, if you want to know what faces people made, the questions they asked and the responses from Carles Puigdemont, here's the video (with English subtitles) where you can see everything:

Oh, by the way... If you want to know how many people rejected the invitation, I'll tell you that not a single one. Everything was exactly as you see it. And I'll add that everyone who took part was chosen at random, without tricks, and that the president accepted the challenge immediately.