The Italian government is "very annoyed" with Spain, for what it considers to be a "betrayal" by the Spanish Foreign Affairs minister, Alfonso Dastis, who had promised to vote for Milan for the new headquarters of the EMA (European Medicines Agency). "But then Spain didn't vote for us", "sources familiar with the affair" have told news agency ANSA (link in Italian). "Bad luck won," they added.

Roberto Maroni, the president of Lombardy, the region whose capital is Milan, didn't take the news well either and said that "it will mean that we will give stronger support to Catalonia in their request for autonomy and independence".

The EMA was awarded to Amsterdam by drawing lots after a draw in the final round of voting between the Italian and Dutch cities.

The Italian prime minister, Paola Gentilono (pictured above), "was very angry" over Spain's vote, said Maroni who had phoned him immediately after the decision was taken in Brussels yesterday afternoon. "Rivalry, spite prevail over strategy," he said. 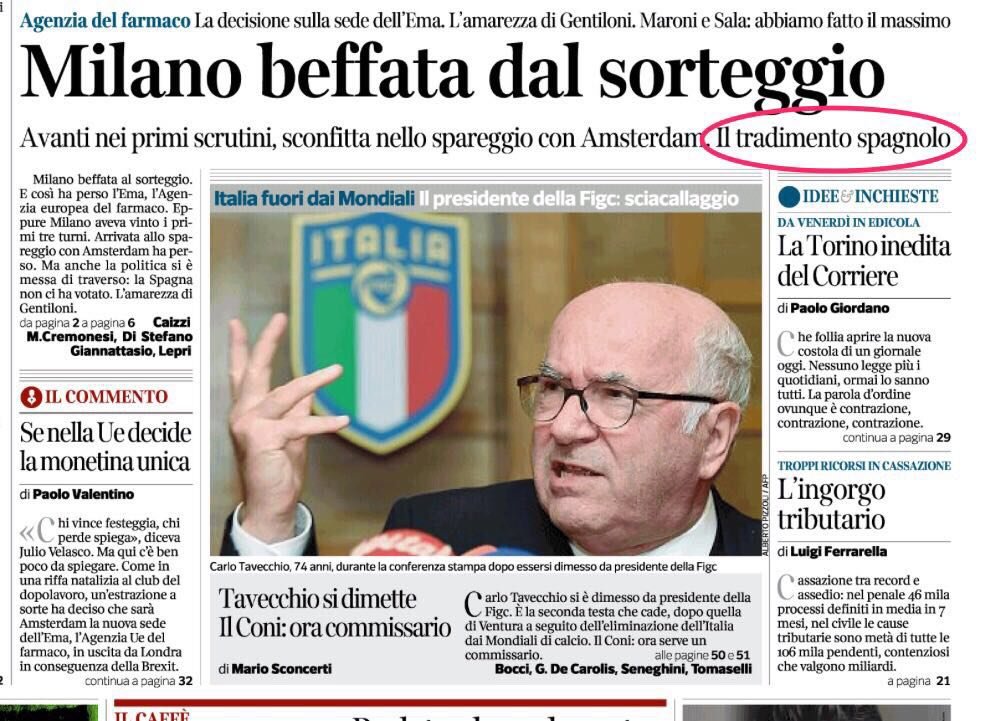 Italy has taken the matter with their classic sarcastic nonchalance disguised as operatic drama. The general expectation had been that Milan would win the EMA vote. The displeasure has been large.

The Corriere della Sera, a Milanese newspaper with the largest circulation of any in Italy, talked of "Spanish betrayal" on its front page. La Repubblica, the centre-left Rome paper attributes the "defeat of Milan" to "the betrayal of Berlin and Madrid" and compares it to the penalty Roberto Baggio failed in the 1994 World Cup which saw Brazil win. The Milano Finanza business daily, also from Milan, described it on their front page as an "unexpected defeat".

Liberal paper La Stampa, published in Turin, Milan's neighbour and rival, also describes the "betrayal of Berlin and Madrid" and open their front page with the headline "EMA, the great defeat of Milan" (note not "of Italy").

Meanwhile, Maroni, president of Lombardy from Lega Nord (North League, regionalist right-wing), took advantage of the situation to take a shot at prime minister Gentiloni of the Partito Democratico (Democratic Party, centre-left): "There's still the doubt that between the second and third votes, when (...) three votes were enough, if the whole government, the prime minister and the Foreign minister had been there, maybe things would have gone differently".