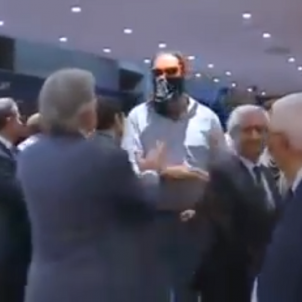 On 11th September 2013, during celebrations for Catalonia's National Day, a group of far-right protesters burst into an event at the Catalan government's Blanquerna cultural centre in Madrid. Today, Spain's Constitutional Court has annulled their sentences and ordered the Supreme Court to issue new ones. It follows the Supreme Court increasing their prison terms, finding an aggravating factor of a motive of ideological discrimination was applicable in the case.

In its ruling today, the Constitutional Court has resolved that it's necessary to "reestablish [the defendants'] rights and, with this aim, declare null the order from the penal chamber of the Supreme Court". The judges found that "the rights to a trial with all guarantees and the presumption of innocence of all the plaintiffs have been violated to the extent relating to the application of the aggravating factor of having committed the crime for ideological discrimination."

The judges have applied European Court of Human Rights doctrine from the so-called Atutxa case, relating to former speaker of the Basque Parliament Juan María Atutxa, which found that courts of second instance, like the Supreme Court here, cannot modify a sentence based on subjective circumstances which concern the parties involved without hearing from them.

The Supreme Court, considering the case on appeal, found that the actions of the defendants showed intolerance of Catalan nationalist ideology and raised their sentences to four years in prison.

One of the defendants in the case is Iñigo Pérez de Herrasti. 60 years old and a leader of neo-Nazi party Alianza Nacional, he has a criminal history including a sentence to 14 years' imprisonment in 2000. On that occasion, he had been arrested with three others with explosives and weapons, allegedly planning to attack relatives of ETA prisoners travelling to visit them in Madrid prisons. Seven years later, he would take part in a hunger strike, protesting what he saw as preferential treatment for imprisoned members of the Basque terrorist group.

His own family includes a number of notable individuals in Spain. His father, Ramón Pérez de Herrasti y Narváez, is the 14th Marquess of Albayda; his mother, Begoña Urquijo y Álvarez de Eulate, the daughter of the marquesses of Bolarque, part of the family of the marquesses of Urquijo. What's more he is cousins, on his mother's side, with former Spanish defence minister Pedro Morenés Eulate (PP), and his sister is married to former education minister and government spokesperson Íñigo Méndez de Vigo​ (PP). Neither politician has been accused of being linked to the Blanquerna incident.