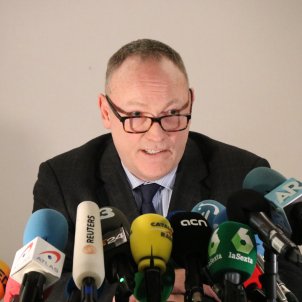 Ben Emmerson, the international lawyer representing Oriol Junqueras, Jordi Sànchez and Jordi Cuixart, has sent a new letter to the UN calling for a "complete and independent" investigation into the Spanish government's attitude after it "scorned" a report from the UN's working group on arbitrary detention​ on his clients' case.

According to reporting by TV3, confirmed by ACN, the lawyer's letter says "it's not a matter of an innocent mistake made in good faith" by the executive, but "deliberate, dishonest manipulation of the process to discredit the UN itself".

Yesterday the Supreme Court refused to accept the WGAD decision that Cuixart, Sanchez and Junqueras should be immediately released. Based on completely false information supplied by the Prosecutor, the Court insulted the UN, calling its decision “insidious”. This is disgraceful.

In the letter, Emmerson calls for the UN to reject the complaints against the report presented by the Spanish government and for an investigation to be undertaken to end with a report or, "if it should be the case, a motion of censure against Spain in the Council", taking into account that "the founding principles of the UN Charter are being clearly violated".

The letter comes after the Supreme Court refused to release the prisoners, as the report called for, and yesterday strongly criticised it. It quotes the court describing the decision as "outrageous, illogical and insidious", suggesting the group had exceeded its powers which are only "auxiliary and informative". Emmerson puts this last claim down to "false information provided by the Spanish government".

Emmerson also refers to the Spanish accusation of potential conflicts of interest, two of the group's members having worked with the lawyer before. He says there is "no type of justification" for this complaint and that he has neither met nor spoken with any of the members of the group, despite having crossed paths professionally in the past. He added that he believes the government leaked it to the press to discredit the group and Emmerson himself.

He goes on to say that "the most worrying thing of all" is that Spain "should use guerrilla tactics against the working group". He says the leak to the press must have been ready before learning of the group's decision because "it was made public only 12 hours later", a timescale he says is "impossible".

As regards the investigation he requests, he says this should cause no delays to the group's work, because otherwise the "government will have succeeded in its attempt to interrupt and frustrate its work".

Editorial Marchena is stung by the UN report José Antich