The new "British" strain of Covid-19, now detected in Catalonia

The new "British" strain of the coronavirus has now reached Catalonia. Catalan health minister Alba Vergés confirmed this Thursday that a case of the new strain had been detected in Catalonia: specifically, in a person who resides in Catalonia and recently returned from the United Kingdom. According to the minister, this is the only case known in Catalan territory at present, but she warned that "it is very likely" that more will appear in the coming days.

"It was a matter of time before it was detected in Catalonia. We have to be monitor it carefully, because it may be more transmissible, but at the moment, it changes nothing in our plan," Vergés told radio station RAC1. CatSalut will give more details as the infected person's contacts are traced.

About the new strain

The new coronavirus variety, which acquired the label of "the British strain" after UK authorities were the first to announce its widespread appearance in their country, is thought to be much more contagious than previous varieties. Mutations in the virus are common, and in fact more than 4,000 SARS-CoV-2 mutations have been seen, including one thought to have originated in Lleida and Aragón last summer which had spread across much of Europe by October.

However, few new strains have acquired the significance of this one. Data suggests that the British strain is 70% more contagious and has increased the Rt transmission ratio by a very significant 0.4. However, it does not appear to increase the risk of serious illness or the mortality rate. As for vaccines, they have been designed keeping in mind that mutations are inevitable. Thus, the scientific community believes that it is very unlikely that they will not work with this new variant. 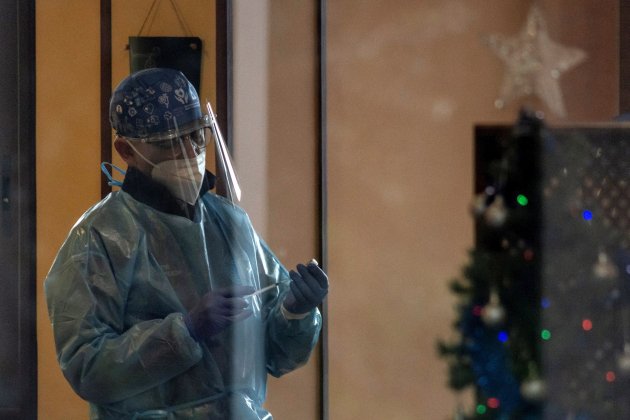 "Even stricter measures would be better"

Regarding the new coronavirus restrictions that have come into force in Catalonia from this Thursday, Vergés warned that the government will be "very strict" with enforcement and regretted that current Covid data is far from the objectives set by the Catalan authorities. Repeating a statement she has made several times in the past, the minister said that even stricter measures were needed, but could not be applied due to Catalonia's economic circumstances within Spain.

"The Catalan government always responds to Covid measures with economic measures. In other countries, the state is responsible for this. Yet, here in the Spanish state, we have not seen this nor do we expect it. Where are the self-employed supposed to be paid from? Madrid. Who is giving assistance to the self-employed? The Catalan government. It is disgraceful that they haven't wanted to provide support for different economic activities and the people who are suffering. We have demanded this many times," she asserted.

What the minister is clear about is that schools will open on Monday 11th and that the vaccine will already have reached all of Catalonia's care homes by the end of January. As well, Vergés celebrated that Europe has now approved the Moderna vaccine - in her view, one further reason for hope.

Since the Three Kings holiday on Wednesday, the epidemiological situation of the virus continues to become more difficult in Catalonia. The EPG outbreak index now stands at 586 points, 10 more than 24 hours ago, when it stood at 576. According to the latest data provided by the health ministry, the Rt contagion index is the same as yesterday, at 1.47 - bear in mind, however, that it needs to be below 1 for transmission to decline. The IA14, the number of new cases in the last 14 days is 414.42 per 100,000 inhabitants. In terms of absolute numbers of new infections, 2,375 more were registered in Catalonia this Thursday while 47 people lost their lives.

Vergés explained that this Thursday's Covid data is, unfortunately, what the CatSalut department expected. The minister acknowledged that figures "are high" - and they need to be "brought down urgently".