Deputies from ERC (Catalan Republic Left), PDeCAT (Catalan European Democratic Party) and En Comú (In Common) have made a last protest at 12pm this Thursday at the doors of the Spanish Congress. With just three days to go to the 1st October referendum, they held a banner reading "Democracy!" to urge on the "democrats" that will make the referendum possible, as well as urging members of the public to "fill the ballot boxes". The initiative comes in the same week as ERC and PDeCAT also protested in the Spanish Senate holding banners showing a face with the mouth taped shut, as a symbol of what the pro-independence senators called "repression".

"Facing the [state of] emergency policy against the institutions and citizens of Catalonia, we want to show a joint image of the Catalan political parties in the Congress and reject authoritarian policies," said Lucia Martín of En Comú Podem. ERC's spokesperson, Joan Tardà, told Catalans to act as "free people of the 21st century" and to go vote "civily and peacefully". On behalf of PDeCAT, their spokesperson in the Congress, Carles Campuzano, remarked that the cry from the three groups is in favour of "democracy and the right to decide", in the name of "the majority of Catalonia" that they together represent. 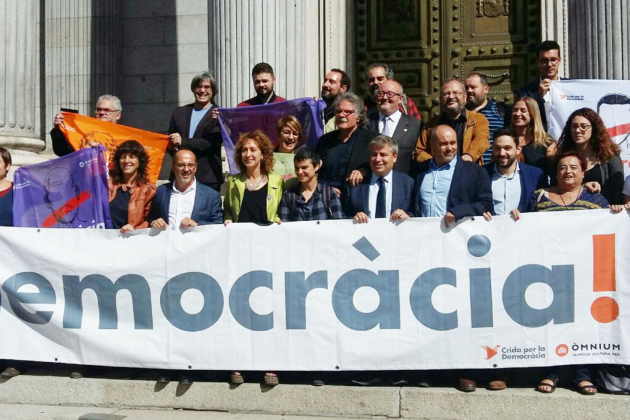