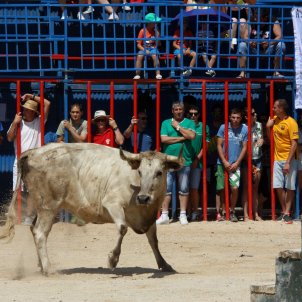 Almost a decade after it banned bullfights in Catalonia, the Catalan Parliament has gone a step further. This Thursday, it has also voted to eliminate correbous (bull runs), an exemption to the previous rule when organised as part of a festival.

Bull runs are events, often originally held as part of transporting bulls to the ring for a fight, where people run along a course of sectioned-off streets of a village ahead of a number of bulls or steers. Unlike bullfights, they do not themselves end in the animals involved being killed.

Today's resolution was proposed by En Comú; it received 50 votes in favour, 17 against and 61 abstentions. Being a delicate manner which crosses party lines, three parties, JxCat, ERC and PSC, had opted to allow their delegates a free vote.

The text of the motion says that, as an advanced society, Catalonia should be on the front line of the defence of animal rights. As such, they urge the Catalan government to undertake the "necessary changes" in the regulations governing traditional festivals that involve bulls and the protection of animals.

The controversy around correbous gained force again in Catalonia after an incident in Vidreres, in the north of Catalonia, earlier this month. On 2nd September, a bull escaped from the area it was meant to be confined to, injuring 19 people, one of them seriously. The animal involved was later shot dead by local police.

The Catalan ban on bullfights was found unconstitutional by Spain's Constitutional Court in 2015, the argument being it contradicted the central government's role to protect shared cultural heritage. Nonetheless, no further events have been held in Catalonia since 2011, before the original ban entered into effect. It had included the correbous exemption as a compromise with those who see them as an important cultural tradition and sign of identity.