Catalan minister Forn, from prison, on the handling of last year's attacks

In a normal situation, the analysis of the 17th August attacks in Barcelona and Cambrils one year on would have featured interviews with the key protagonists of the management of security and the investigation following that day: interior minister Joaquim Forn and the head of the Mossos d'Esquadra, the Catalan police, Josep Lluís Trapero. But the mourning coincided with the political context of the run-up to the 1st October independence referendum, and the consequences of that vote, with the legal proceedings against Trapero and Forn. The latter has been in prison since 2nd November 2017. They are both awaiting trial, the first for sedition, for not having prevented the referendum, and the second for rebellion, for having proclaimed the republic.

So, the analysis of how Catalonia's police worked to dismantle the cell is missing its main protagonists. Joaquim Forn, in an exclusive article for El Nacional from Lledoners prison, links the Mossos' management of the crisis with the political context and the later consequences it's had for the force's sernior political and technical leadership. For the first time, he publicly explains what happened in the meeting on 17th August itself with the then Spanish prime minister, Mariano Rajoy: "At the end of the meeting, I comment to some of the police in attendance that the Spanish government didn't like it at all and that it will have consequences. I wasn't wrong". 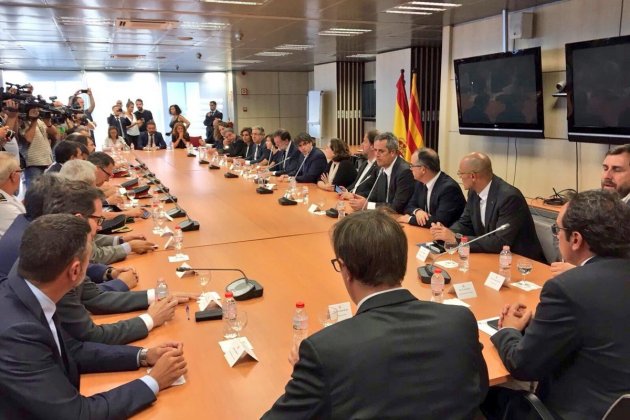 For his part, Trapero offered an hour-long explanation of the investigation; he was the only representative of the police forces to have real and reliable information on events, the cell's composition and the expectations to dismantle it.

A year later, from Lledoners prison, Joaquim Forn recalls his experience of the hours before the attacks, the events of 17th August and the following days, during which the whole cell was dismantled. He makes special mention of the work of all the Mossos, major Trapero and the force's then head of communications, Patrícia Plaja. And he has a special message for the victims and their relatives.

He gives a call to social harmony and remembers: "The public shouted 'No tinc por' (I'm not scared) to demonstrate that our country's most-prized asset is coexistence and that we won't surrender to threats or fear".

17th August 2017 is a date which will remain in the memories of many people, myself included. A date we'll incorporate into our personal and collective memory. We'll always remember where we were that day and what we were doing. It's a date which all Catalans will associate with different places around our country: Alcanar, Barcelona, Cambrils, Ripoll and Subirats.

Fate wanted me to experience those sad events from the Catalan interior ministry. I'd been named minister just 33 days earlier. We knew that Barcelona and Cambrils could be targets of a jihadist terrorist attack. I want to note that, since 2015, the terror threat level in Catalonia had been 4 out of 5. It's demonstrated that this threat was a priority for our government by 35% of patrol hours in Catalonia and 40% in Barcelona being assigned to preventing it in the framework of the Anti-terror Specific Operational Plan.

I remember that one of the first meetings I had in July was precisely with the Anti-terror Coordination Cabinet. That day, major Trapero and other police leaders presented the latest improvements which had been introduced to the Anti-terror Plan to me. Little could I imagine that the names of the Cronos plan and operation Cage would be so familiar to me just weeks later.

In the early morning of 16th to 17th August, I returned home gone midnight. Before I got into bed, I received a call from the director of the ministry's territorial services in Terres de l'Ebre who informed me that there had been an explosion in Alcanar and that fire-fighters and the Mossos d'Esquadra were working to determine the cause. First thing on 17th August, I was told of the scale of the explosion and that the clean up by firefighters and the police investigation were continuing. No hypothesis was counted out, but nor was there any evidence that the explosion could be linked to terrorism.

17th August, towards 3pm, I went to visit an exhibition at Saló del Tinell on the Reformation in Europe, Imatges per creure. I was accompanied by the curator. in the afternoon, we said goodbye and my car picked me up from plaça Sant Jaume. As I was heading to the ministry I noticed a significant movement of police vehicles and the urban guard. Right after, I got a call telling me that multiple people had been run over on the Rambla. The first report was that a van had run over an indeterminate number of pedestrians, but in no case was it thought it could have anything to do with a terrorist attack. It wasn't for a few minutes that this hypothesis started gaining traction.

I spoke with major Trapero, who was already informed of the events and was heading towards Barcelona. We agreed to call together CECOR (Coordination Centre). I immediately informed president Puigdemont and the Spanish government's delegate to Catalonia of the activation of CECOR at the interior ministry and I invited the National Police Corps and the Civil Guard to attend.

Shortly after 6pm, we had CECOR gathered and were giving the first news conference before the media with major Trapero. We saw clearly immediately that informing the public would be a key element in managing the crisis. Serenity, safety and maximum transparency had to be transmitted, at the same time as avoiding speculation or giving out information which could make the police's task more difficult. I want to highlight the great work done in this area by the Mossos' head of communications, Patrícia Plaja.

I won't prolong the recitation of the facts, which are already well-known. I'll mention some moments which are important from the political or police points of view, the most worrying moments, like when we're told that a vehicle had jumped a police control and injured three officers at Sant Just Desvern, and that a dead person has been found inside the vehicle; like when we start to have clues of a possible link between the explosion in Alcanar and the attack on the Rambla; when we receive the news that, on Cambril's passeig marítim, a vehicle has charged a Mossos d'Esquadra patrol and injured an agent; when a shootout happens in Cambrils which ends with the deaths of five supposed terrorists; when the entries and searches of properties in Ripoll start, etc. As the hours pass we see that the act on the Rambla wasn't an isolated incident, that we're facing a significant terrorist act, with an organised, highly capable group.

The day after the attack, a ceremony in memory of the victims is held in plaça Catalunya. In attendance are the Catalan government, Barcelona's mayor, the Spanish government and the head of state. It's a strong demonstration, a public outcry against violence and in favour of peace. Once the ceremony is over, president Puigdemont asks for a meeting with representatives of the Spanish government to be able to inform them on the investigation and the actions being carried out. The meeting is held at the interior ministry. It's attended by president Puigdemont and prime minister Rajoy with their ministers, mayor Colau, representatives of the police, Civil Protection agency and the Medical Emergencies Service, among others. It becomes obvious in the meeting that the Spanish state's role in the crisis is almost symbolic. At the end of the meeting I comment to some of the police in attendance that the Spanish government didn't like it at all and that it will have consequences. I wasn't wrong.

In the following days, police efforts are focused on the search for the suspected driver and perpetrator of the attack on the Rambla. I remember that we were in a meeting of the Anti-terror Coordination Cabinet when we were informed that a person had been cut down by police in Subirats. Everything suggested it could be Younes Abouyaaqoub. Once his identity had been confirmed, I travelled to the Catalan government palace with major Trapero to inform the president that the terror cell had been dismantled.

They were days of great tension, intense days. The police success cannot mean we forget there were 16 deaths and a large number of people injured. Too many families broken, who will never be able to forget that tragic 17th August 2017. My thoughts for them all.

In the area of the police, it showed the great technical and professional ability of the Police of the Catalan Government - Mossos d'Esquadra (CME). I pass on my acknowledgement for the 17,000 agents and officers. A very special acknowledgement for major Josep Lluís Trapero. Without him, without his professionalism and leadership ability, we couldn't have confronted such a crisis. This success is the fruit of many years of work, of many people from the CME and of political leaders who have always believed that Catalonia should have its own tools to guarantee its security.

Finally thank you to all the citizens of Catalonia and thank you for the solidarity we received from around the Spanish state and the world. From members of the public who shouted "No tinc por!" to demonstrate that that our country's most-prized asset is coexistence and that we won't surrender to threats or fear.