Almost 200 Catalan mayors have, in Brussels this Tuesday lunchtime, called for the release of Catalan "political prisoners". They marched through the city's European quarter to the front of the European Commission building, where they unfolded a banner in protest of the imprisonment of over half the Catalan government.

"Fundamental rights are being violated and we have political prisoners and as Europe isn't listening we've come directly to make them aware", said the president of the AMI (Association of Municipalities for Independence), Neus Lloveras, in comments to the media. "We've come to the political capital of Europe to explain the vision of the local world, to show the general anger at having political prisoners", said the president of ACM (Catalan Association of Municipalities), Miquel Buch.

"We're coming to internationalise our point of view," said Buch. "We want them to listen to us and to take into account a people who have run a model process for freedom," he added. For her part, Neus Lloveras, explained that they have travelled to Brussels to "personally communicate the worries of our populations". "We want it to be known in Europe," said the president of AMI.

The president of ACM added that the objective of the trip to Brussels wasn't "to go and see president Puigdemont". "If the president and the government can come with us we'll be delighted, but if they're not there we'll understand perfectly," he added. He said that "many [more] mayors" who "wanted to be here" have had to remain in Catalonia.

The mayors have taken a group photo during their visit to the city, from where they want to "internationalise" the situation in Catalonia with an event planned for this afternoon. The event is called "Catalan mayors in support of the Government of Catalonia" and will take place in Brussels' Bozar Cultural Centre.

The event is expected to include speeches from Lloveras and Buch as well as a number of the mayors in attendance, including those of Sabadell, Matias Serracant, Girona, Marta Madrenas, Alella, Andreu Francisco, and Catalan MEPs Josep Maria Terricabras (ERC), Jordi Solé (ERC) i Ramon Tremosa (PDeCAT).

The organisers haven't clarified whether they expect president Carles Puigdemont and the four Catalan ministers with him in Brussels to attend. On Sunday, a judge in Brussels decided to release the five with cautionary measures pending a decision on Spain's extradition request. 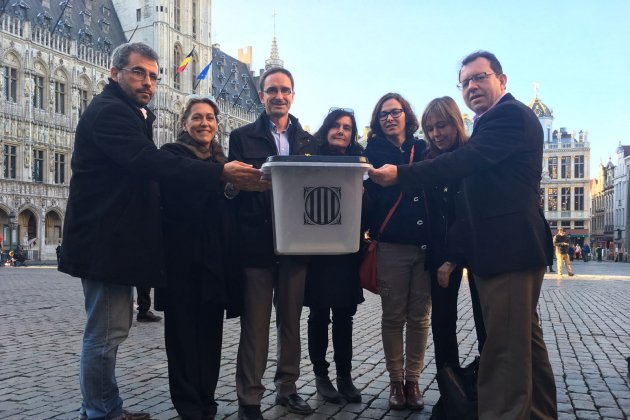