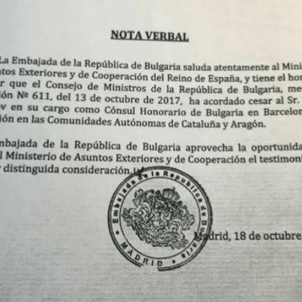 Bulgaria has dropped the former Barça football player Hristo Stoichkov as honorary consul to Barcelona, for the controversy he had with the Spanish vice-president, Soraya Sáenz de Santamaría.

The Bulgarian government took the decision after Santamaría announced she would bring action against Stoichkov, after the former player made statements saying that the Spanish police is "Francoist" and accused her of "sending the police to hit innocent people", in relation to the attacks during the operation to try to prevent the 1st October referendum.

Translation: Hristo Stoichkov has been dropped as Honorary Consul of Bulgaria after his criticism of the PP [Popular Party] for the police brutality of the 1st October in Catalonia.