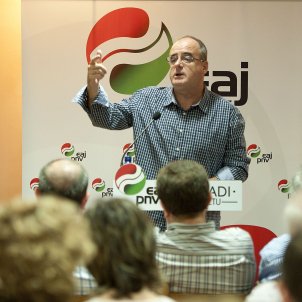 The spokesperson for EAJ (Basque Nationalist Party) in the Basque Parliament, Joseba Egibar, has said this Saturday that "there is no possibility of agreement" with his party over Spain's 2018 budget. The Spanish Congress of Deputies has 350 seats of which prime minister Rajoy's PP (Popular Party) hold 135 and, as such, relies on votes from parties like EAJ, which is also centre-right in terms of ideology, to pass anything.

In a discussion between Basque politicians on Basque public radio station Radio Euskadi, Egibar asked: "With a PP, with a Spanish government which has set all its politicojudicial machinery against the independence process in Catalonia" and "its governors", "what area of negotiation should [the EAJ] have with the PP?"

The nationalist spokesperson indicated that, "evidently", EAJ will defend Basque interests and there will be an "ordinary inter-institutional" relationship between the Spanish and Basque governments, but said that the two parties "aren't speaking" about next year's budgets. To do so, he says, would require "a minimum level of democratic decency" from the PP.

However, PP deputy Borja Sémper made a statement to the contrary: "I have information that it's being discussed", he said, arguing that "it would be good" for the Basque Country if "there were an agreement".