The Mossos d'Esquadra (Catalan police) knew of the possibility of an attack in Cambrils. Hours after the attack on the Rambla in Barcelona, they located a third van in Baix Camp, the county that contains Cambrils, where, at 1am this morning five terrorists attacked passeig Marítim and Club Nàutic.

The police had found three vans after the attack on la Rambla. One abandoned after carrying out the attack in Barcelona, another in Vic, a town an hour from the city, and the third in Cambrils. News of this third didn't emerge yesterday although, when the Mossos chief, Josep Lluís Trapero, spoke to the press, he already knew that they had found it. Only two hours later, the five terrorists burst onto passeig Marítim in the Audi.

The three vans allow for the attacks to be connected and Trapero admitted last night that "that line of inquiry is gathering speed", following the trail of the rented vehicles.

The police are working with the hypothesis of a single group that had spent months preparing a series of attacks using explosives in Catalonia. On Wednesday, however, part of their preparations went up in smoke with the explosion of a house in Alcanar which killed one of the alleged terrorists.

According to Trapero, having lost some of the materials they were planning to use, the terrorist group, attacked "out of desperation" and organised the events in Barcelona and Cambrils in the most "rudimentary" manner.

One of the people injured in Alcanar has been arrested. For the time being only gas cylinders have been found among the debris, but police have not discounted the possibility of finding some other kind of explosive or, even, the body of a terrorist. 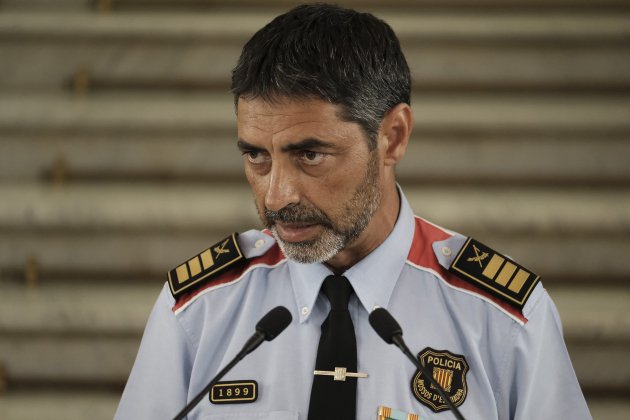 The driver, so far unidentified

The Mossos are now focused on identifying the presumed terrorists, both those who died yesterday in Cambrils as well as other possible suspects who might have been involved in the attacks or the preparations. Especially important is the identification of the van driver of the attack on the Rambla yesterday.

It cannot be discounted that he is one of the deceased terrorists in Cambrils, but nor that he is still free and in hiding somewhere. As a matter of fact, not even the identity of the suspect is known, nor if he is Moussa Oukamir. Oukamir, that said, has been wanted by police since 5pm yesterday afternoon.

The police cannot discount the possibility that the driver of the van in Barcelona was in Cambrils, but neither do they have enough evidence to be sure of it. The Mossos do say that they have been able to identify the people who hired the three vans and hope to be able to make more arrests in the coming hours.

For the time being there are 4 people under arrest. They are the one injured in Alcanar and three more found in Ripoll, in the north of Catalonia, one of whom is the brother of Moussa Oukamir. None of them have a prior record for terrorism. They are 21, 27, 28 and 34 years old.

"The number of people identified keeps changing. We need time", Josep Lluís Trapero, head of the Mossos, said, without wanting to give details of how many people they are looking for and how many they have already identified.

The terrorists of Cambrils wore belts on their waists with false explosives, apparently to appear more dangerous and incite the police to shoot them, otherwise the police would have been able to aim at their limbs instead. This method has been used in other international attacks.

The case of Sant Just Desvern

It is not yet clear what it happened with the corpse found with a dagger in its chest in the car that had fled from a police checkpoint on the Diagonal street. What is known for sure is that the driver later abandoned the vehicle and escaped on foot, leaving the corpse in the back of the car. The dead person has been identified as the car's usual driver.

The police have opened a parallel investigation and do not discount the possibility that the incident might be linked to the attacks, even though for the time being there is no evidence of any link.