VIDEO | The most spectacular images of the La Palma volcanic eruption

Here are are some of the most spectacular videos of the volcanic eruption on the Spanish island of La Palma, and also of its consequences:

The eruption of Cumbre Vieja, the volcano on the island of La Palma, started suddenly just after 3pm on Sunday 19th September and after more than four days it is now entering a new, more explosive phase. The virulence with which material is being thrown skywards from the vents appears to contrast with another change: the slowing of the speed of the lava, so that it is now in question whether it will eventually reach the Atlantic Ocean.

Thanks to the slow progress of the lava, residents of the locality of Todoque, in the midst of the lava flow zone, have been able to access their homes to save furniture, appliances, souvenirs and, everything they have been able to fit into vehicles. Residents can only access their homes before the road is "collapsed" by lava, which is why they must always be accompanied by security personnel or emergency teams.

Less likely to reach the sea

The speed of the lava movement has slowed since the new Canart Island eruption began. At first, lava rivers moved at 700 metres per hour, less than the speed at which people normally walk. Subsequently, it has been reducing its advance from 120 metres per hour down to the current 4 metres per hour.

The slowdown is closely related to the cooling of the lava, the longer that it is in contact with the air. This new scenario draws into question the scenario for which the emergency services were preparing: the entry of lava into the sea, an event with dangerous consequences due to the creation of toxic gases due to reaction with the seawater, is now less likely. 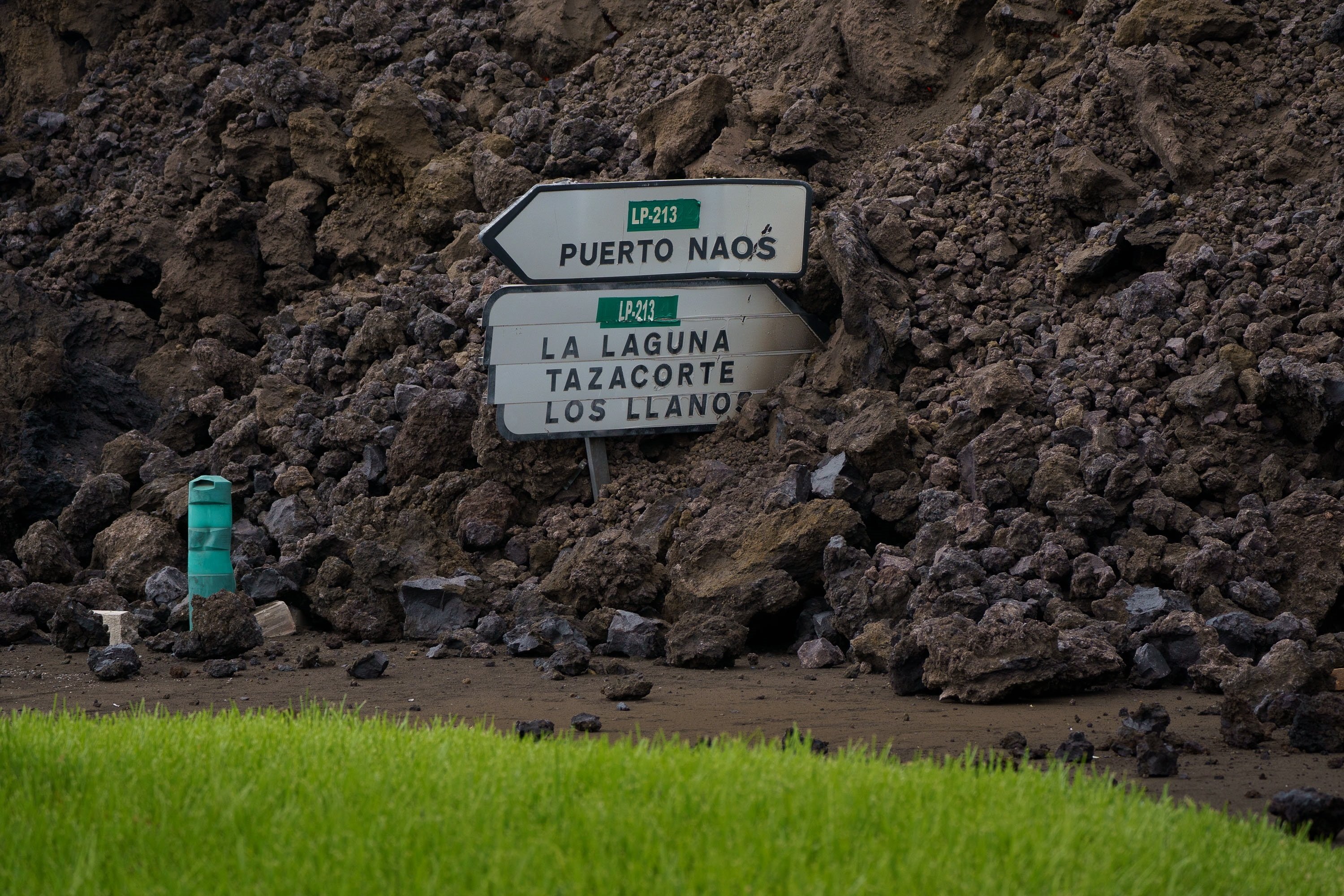 Sign half buried by lava from the La Palma volcano / Efe

Some experts point out that while contact with the seawater of the lava would create a new situation of greater risk, the fact of not doing so gives also more destructive power to the flows. This is because instead of flowing into the sea the lava will continue to spread very slowly over the land.

Housing for the victims

The Canary Islands government has announced that it will buy 73 empty homes in La Palma and will make available other prefabricated dwellings for residents who have lost their homes due to the volcano, according to Europa Press.

Specifically, these homes are in two private developments that are currently empty, one in the town of Tazacorte, with 44 homes, and another in the Montaña de Tenisca, in Los Planes de Aridane, with 29 dwellings.

So far, the lava from the Cumbre Vieja volcano has covered a total of 166 hectares and destroyed 350 buildings, according to satellite monitoring by the European Union's Copernicus programme.