Great Catalan soprano Montserrat Caballé died this Saturday at the age of 85 in Barcelona's Hospital Sant Pau. Caballé had been a patient at the Hospital since mid-September.

Caballé is regarded as one of the greatest sopranos of the second half of the 20th century. She first made her name in opera through the quality of her technique and her interpretations of major roles in the bel canto of Rossini, Bellini and Donizetti. The soprano made her professional debut in 1955 and gave more than 4,000 performances in seven decades on the operatic stage.

During this long career she accompanied many of the greatest artists of the moment, but she herself said that she had a special relationship with three artists: Josep Carreres, Plácido Domingo and Luciano Pavarotti, the "Three Tenors". Her interpretation of the song 'Barcelona' with Queen's Freddy Mercury at the end of the 80s was also a highlight, a song that later became the theme song for the 1992 Olympic Games in Barcelona, as well as a chart-topping hit, and is regarded as one of the great combinations of opera and pop. The diva and the popstar made a full album together, but were unable to sing the duet at the Games' opening ceremony, as the British singer had died as a consequence of AIDS a year earlier.

Born in Barcelona on 12th April 1933, Caballé entered the world of classical music at an early age with studies at the city's prestigious Conservatori Superior de Música del Liceu, attached to Barcelona's opera house, the Gran Teatre del Liceu. She had to abandon her classes for a time due to the precarious health of her father, going out to work to pay for an operation that he required.

Cultural patron Joan Antoni Bertran then covered the costs of her continuing in opera, allowing her to return to her studies at the beginning of the 1950s. There, she came to know the sopranos that would most influence her in the launch of her professional career, such as Eugenia Kemmeny, Conxita Badia and Napoleone Annovazzi.

After completing her studies at the Liceu, Caballé made her debut on the stage in 1955 interpreting Serpina in Pergolesi's opera 'La serva padrona' in three summer performances in Valencia, Reus and Figueres. The following year she joined the Municipal Theatre of Basle, Switzerland. 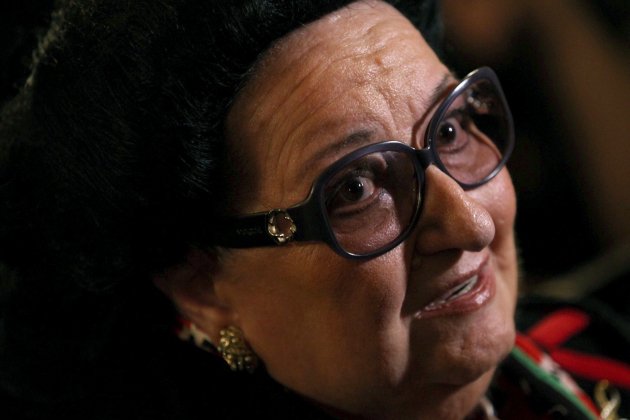 Her première performance at the Liceu would not arrive until 1962, when she interpreted the title role in 'Arabella' by Richard Strauss. Before this, she had triumphed on the stages of Bremen and Vienna, winning acclaim in the Austrian capital for her performance as Donna Elvira in 'Don Giovanni'. By this time she was already achieving international recognition and this was consolidated in 1965 in New York's Carnegie Hall, when she substituted Marilyn Horn in 'Lucrezia Borgia' - a work by Gaetano Donizetti, a composer whose works Caballé would end up interpreting extensively. Others of her signature roles were in the operas of Giuseppe Verdi.

Among the awards she received in recognition of her artistic quality were the Gran Teatre del Liceu's Gold Medal in 1996 and the Grammy for the best solo vocal interpretation in classical music in 1968 for her album Rossini: Rarities. As well, she gained the Gold Medal from the Generalitat de Catalunya in 1982 and shared the Prince of Asturias prize for the arts in 1991 with other opera singers.

Catalonia's Generalitat authorities gave her further recognition in 2003 with Catalonia's National Music Prize after her return to the Liceu with the Saint-Saëns opera 'Henry VIII'.

The great soprano's funeral is to be held on Monday at noon at the Tanatori de Les Corts in Barcelona, where a wake will take place from 2pm on Sunday.

In October 2012, the soprano suffered a minor stroke while in Russia, which did not affect her mobility or speech, but caused her to break her arm. A conservative treatment was performed that avoided the need to operate. This setback forced her to suspend a concert in the Auditorium of Girona.

By this time Caballé had greatly reduced her public appearances. One of her memorable final acts on the stage was the homage given to her at the Teatro Real in Madrid in December 2014, at which several sopranos, among them her daughter, interpreted a range of different pieces and looked back over Caballé's artistic trajectory, especially the decades of the 60s, 70s and 80s, when Montserrat Caballé was at the peak of her career.

For the last few years of her life, Caballé had been almost completely withdrawn from public exposure but was in the news for her problems with the tax authorities, who considered that she had evaded payment of half a million euros in 2010. In the end, the soprano reached an agreement with the prosecutors and state lawyers to avoid a trial or prison – she accepted a prison sentence of six months that could be cancelled with the payment of a fine.

She was then required to make statements before the judge, which she was permitted to do from her home for health reasons. She denied the tax authorities' assertion that she had committed tax fraud. She explained that during the year in question she was living in Andorra and only came to Barcelona to go to the doctor or pass through the airport, while the public prosecutors maintained that the soprano lived in the Catalan capital.

A selection of Montserrat Caballé's most memorable performances can be seen here.