Sixena, the first trophy of article 155

And they went. Nothing more said. Facing the complicit silence of the facilitators of article 155 of the Constitution. In a moving van, after several hours packing up the 44 pieces from the Museum of Lleida and in the middle of a police operation which needed the Mossos d'Esquadra (Catalan police), the Civil Guard and even sharpshooters posted on the building's roof. There were protests, lots of protests. But Sixena now has its artworks and Aragon a political triumph of the type that changes governments. It bothers them when they say that what happened on Monday in Lleida was plundering or sacking and they argue that there was a verdict from the local instructing court in Huesca. What no one talks about is that it could have been appealed and there were ways to delay and maybe prevent it from happening. Also to demand that, given the lack of a Catalan government which could defend Catalonia's interests, those substituting for them from Madrid should act as a government in functions and delay everything until there is a government after 21st December.

But, as in other cases, it wasn't a question of sitting down to talk. The strength was shared out, it's all on one side. The important thing was the show, the loot. There's no doubt that it's been a hit-and-run and that complaints will mean little. More than that, surely there will be no Sixena effect on the polls. As an expert in opinion research said, nobody changes their vote to support independence over a couple of artworks. And perhaps the expert is right. But it's been a hit-and-run with all those of the law and which opens a serious precedent given that the ownership of the pieces which the Catalan government had purchased had more than enough documentation. There are works from the Sixena monastery in other places, in Madrid and New York. In the Spanish capital, in the famous Prado Art Gallery, the representation of the Nativity, an oil-on-wood painting from the start of the 16th century. It's in Madrid and in Madrid it will stay. But how cool would it be to claim a piece from the Prado for Sixena. It has to be provincial.

Madrid has sent a warning: the effects of article 155 are endless. It just depends on the button you want to push: people, parties, entities, associations, foundations, professional schools, museums, sports clubs. It's not something ethereal as PP and PSOE take it upon themselves to say on a daily basis. Ciudadanos doesn't need to say anything as nobody doubts their position. Collateral damage, like the mayor of Lleida, Àngel Ros, president of PSC (the Catalan branch of PSOE), is part of something considered very minor. Friendly fire doesn't count the losses in Catalonia, but the wins in the rest of Spain.

Moreover, this is all part of this campaign which looks to leave the independence movement without oxygen by whatever means necessary and with ever more severe warnings. The fear campaign doesn't only involve getting voters to change sides, a difficult task, but also demobilising pro-independence voters in the face of a challenge which, actively and passively, is repeated to be unattainable in print newspapers, on radio and television. Sixena marks a milestone and a way to do things. The recipients should play the fool. 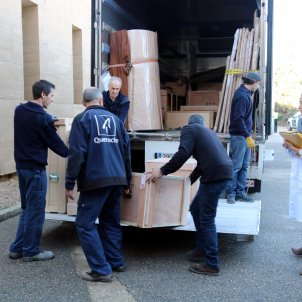