Making it in America

Barça seems determined to play the role of guinea pig in the experiment by the Professional Football League, which the far-right Javier Tebas presides over, to start playing matches in the United States. Specifically, there seems to be an agreement that the Girona-Barça game will be held in Miami on 26th January. La Liga has given a whole string of incentives for the Catalan classic to go overseas and, in exchange for different financial bonuses and help for Girona supporters, it's leaking out that the match would have a marked Spanish flavour, with 40,000 flags handed out to attendees and the anthem being played. All of this, along with an express ban on pro-independence estelada flags. It would be quite the success for the admirer of Jean-Marie le Pen who, moreover, doesn't hesitate to admit he still thinks the same as when he was a member of Fuerza Nueva ("New Force").

In any case, the question isn't what Tebas hopes for with this American bet, rather: why are Girona and Barça offering themselves for it? The Germans have strongly opposed it and the English, who without a doubt currently have the most powerful European league, seem to be leaning the same way as them. The players aren't at all keen on such a voyage, so many kilometres and at a time when they'll already be in a certain rhythm with the competition. Nor does the Federation like it. And the members? Nobody has asked us Barça members, maybe because we are, on this occasion, the visiting team, and it wouldn't directly affect our season tickets. And when Barça's the home team? And then there's also a basic question: can a Catalan derby end up being a Spanish match in Miami as if it was Valladolid facing Madrid? Does the Catalan Federation not have anything to say?

That all of this should happen at a time when Barça's board has just made some changes strengthening its most Spanish nationalist streak, has to be a coincidence. Or not. When there's a lot of money on the table, coincidences tend to be uncommon. And president Bartomeu has given no great explanation on the topic. And it's not a minor question. If something's never talked about, it's not calming, it arouses all speculations. The always-sharp journalist Xavier Garcia Luque, who has a huge knowledge of sports history, has also just brought up an unnoticed detail: that the match to be played on 26th January in Miami falls precisely on the 80th anniversary of the entrance of Franco's forces into Barcelona. Maybe for that reason, Tebas wants to treat himself. But, in these conditions, he can try making it in America. Not us. 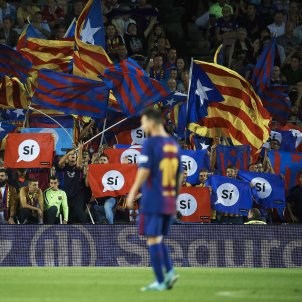