In Catalan politics there have been two certainties for some months: that any day there could be a violent incident and that the aggressor would be a far-right fascist and the person assaulted an independence supporter. I know there might be people who are shocked by such an emphatic statement, but in recent months hundreds of violent actions have been documented, enough to statistically be able to state which side the aggressor and the victim will fall on. As such, when, on Tuesday night, it was learnt that the photojournalist Jordi Borràs had been attacked by a person who identified themselves as a member of the Spanish National Police, who had shouted "¡Viva España, Viva Franco!" before causing him various facial injuries, the dreaded news sadly wasn't surprising. It horrified, sure, but didn't surprise.

It was the story of far-right permitted impunity, repeatedly denounced, and which has recently had a violent presence in the streets. Far from reducing it politically speaking, it's been given a boost by the events surrounding the 1st October referendum last year and, above all, the application of article 155 of the Constitution. It has to have been there, for example, at Catalunya Ràdio when a mob of Spanish nationalist fanatics turned up on 27th October last year to scenes of high tension with broken windows, workers finding it impossible to leave the broadcaster's building and even an attempted assault. That situation ended with practically no punishment for the attackers. Mind you, the world ranking of press freedom published annually by the NGO Reporters Without Borders saw Spain fall to 31st place, behind South Africa and Cape Verde.

Borràs is a laudable photojournalist and a specialist in the world of the far-right and its branches in Catalonia. His documentary background is enormously valuable when it comes to identifying the most violent activists in the demonstrations, gatherings or meeting they hold. President Quim Torra choose Borràs's book Dies que duraran anys ("Days which will last years", untranslated) as a gift to the Spanish king at the opening ceremony of the Mediterranean Games held recently in Tarragona; the work is a very detailed compilation of the police violence of the 1st October. In his dedication to Felipe VI, Borràs wrote: "There's no lineage, nor law, nor homeland which would justify injured people, political prisoners and exiles. There's no lineage, nor law, nor homeland which can stop the Catalan people's longing for freedom".

The Mossos d'Esquadra, Catalonia's police force, has the duty to remove the far-right violence which has had free rein over these months from the country's streets. In Barcelona, the urban guard and the capital's mayor have to do the same. It's happened once and in this confusion in Catalonia between partisan politics and civil rights there are parties which have kept a shameful silence. Now, the police objective is that this never happen again. 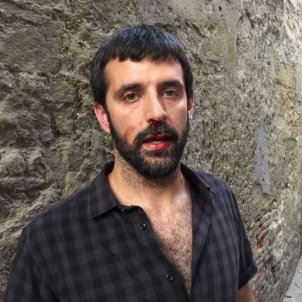