Europe must take action against Spain

There's no other interpretation: the outrage suffered by Oriol Junqueras's rights from the Supreme Court and its latest refusal to release him, so he could attend the plenary session in the European Parliament next Monday, thus respecting the immunity granted by the Court of Justice of the European Union (CJEU), has now crossed Spain's borders and fully concerns Europe's authorities. Europe must take action against Spain without any more hesitation via one of the two paths possible: the European Parliament, whose majority has been changed without any legal reason, or the Court of Justice itself, clearly scorned. What the Supreme Court is doing is not acceptable in any circumstance, and is a true joke, reinterpreting the European justice system's decisions to not budge an inch on Junqueras's textbook immunity, since the sentence was handed down when he already had it.

Although it was expected, that doesn't make the Supreme Court's decision on Junqueras any less condemnable. It's surprised nobody since the precedents of legal actions didn't allow anything else to be forecast. But the fact that nobody wagered that the chamber presided over by judge Manuel Marchena would accept what the CJEU had said doesn't reduce its importance. On the contrary: it's another example of the certainty that exists that it's harder to budge an inch than to write off what higher courts have invalidated. It's for all this that, in the first instance, the European Parliament cannot let slide the flagrant violation of Junqueras's rights, by which his situation of imprisonment in Lledoners isn't modified. The CJEU will also have to have its say because the case has now clearly expanded beyond Spain's borders.

From now to Monday, the day he should be sitting in his place in Strasbourg, all legal chances must continue being pushed for to overturn Junqueras's situation. All chances possible, without exception. Because there's no other way to achieve the reversal of the situation of injustice for Junqueras with respect to his non-recognised immunity than to broadcast as widely as possible what the Supreme Court is doing. It would also be good to hear the opinion of the Spanish government, apparently enthralled with the announcement of its ministers in dribs and drabs and tripping up its Unidas Podemos partners for the first time, creating as many as four deputy prime-ministerships to dilute Pablo Iglesias's one. Pedro Sánchez knows a lot about that. What's happened to that mantra that sentences are to be obeyed? Perhaps that only goes for Spanish courts, whose sentences are almost always predictable, and it's something very different when it's a question of the European justice system.

And, whilst all that happens, Spanish democracy and justice are showing themselves to the world, naked. Ever more naked. 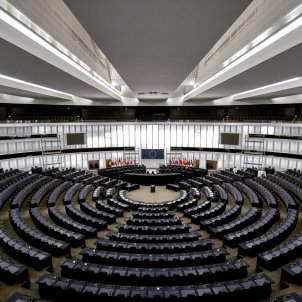