Who's defending the Sixena artworks?

From midnight this Monday, Spain's Civil Guard is authorised to enter Lleida Museum and remove the 44 artworks claimed by the Sixena monastery, supported by a local court in Aragon. The Culture Ministry's attitude favours Aragon's interests and harms Catalonia's. This wouldn't be a problem if the Catalan government hadn't been intervened in and the relevant minister could keep the lawsuit going or simply force a delay in the delivery of the artefacts, since there aren't enough legal requirements to avoid a rushed delivery which would just end up damaging the museum pieces.

The fact that the transfer of the Sixena works directly impacts the editorial campaign is good news, since it puts everyone in their places at the worst moment, when the parties are fighting over a handful of votes which, in the end, could be decisive in a bitterly-fought election. The supporters of article 155 see how minister Íñigo Méndez de Vigo washing his hands of the issue shreds any declaration of opposition to the works being moved, as they say time and time again that this article of the Spanish Constitution has nothing to do with Sixena.

The fact is that, however often they say it, they know it's a lie. When you deliver the keys to the Catalan government into the hands of those whose priority is to turn it into a small autonomy, with the minimum possible powers, with no economic resources to carry out any political activity, that's the only possible outcome. Article 155 has expelled the government from their posts and has sent the president and his ministers into exile or prison. When did the mayor of Lleida think that minister Méndez de Vigo would look out for the Sixena works as a minister of the Catalan government would? As the Spanish saying goes, setting the fox to guard the hens can never be good business. Playing yes men to the suppression of Catalan autonomy ends up causing foreseen, but also unforeseen damage. 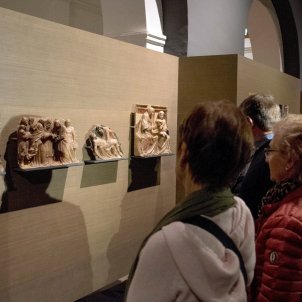 Editorial Sixena, article 155 was about that too José Antich