Freelancers are on the warpath, and they have every right to be, after the Spanish government's decision to refuse to suspend the monthly sums that self-employed autònoms have to pay to the tax department for March (to be paid on the 31st) and April (on the 30th). A decision which says, beyond the government's verbal diarrhea and the statements by minister María Jesús Montero, that it is to be paid without exception - deferment of tax payments until July isn't acceptable either - whether you have any balance in the bank or not. It almost sounds like sarcasm that tax payments can't be delayed and yet what is approved are government guaranteed loans so that people can pay their tax.

This is not the most costly measure for the Spanish government since it implies that the administration would miss out on about one billion euros going into its coffers in March and an identical amount in April. It is not so because of Pedro Sánchez's grand speech the day he decreed the state of alarm announcing that 200 billion euros would be mobilized, of which this sum is just 2%. However, it is surely the measure that symbolizes, like no other, the governmental sensitivity to social and economic concern about the coronavirus. Especially since the ranks of the self-employed in Spain include more than three million people.

Other European governments have already done it, but Spain's Calviño-Montero economic tandem is in favour of the orthodoxy imposed by Brussels, in which the Spanish economy minister has blind faith. The sensitivity of a government is demonstrated by its measures and not its speeches, not by going to demonstrations and not by making great patriotic proclamations. Of these last three actions, the Sánchez-Iglesias executive has done more than enough in the short time it has been in power. With the help of assertions like "we'll stop this virus together" they are maintaining a narrative that is anything but following the advice of the scientists. What's more, a huge campaign of debunking gets triggered when any of them goes off-message.

The accumulation of errors could carry this government away, and the people to ask about that might be former PM José Luis Rodríguez Zapatero and a labour minister called Celestino Corbacho, who, one day in 2007, proclaimed on television that Spain would never reach the figure of four million unemployed. In 2011, he left the ministry with more than six million out of work. All because of not knowing how to see the scale of the crisis that was coming and getting the response wrong.

Editorial Your money or your life José Antich 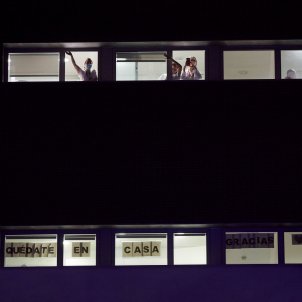