This year marks the 100th anniversary of the foundation of the Spanish Legion. However, is there anything to celebrate?

At the service of ritual

The Spanish Legion or Foreigners’ Regiment is a military corps composed of mercenaries, created to minimise casualties of soldiers during the Morocco campaigns (1909-1926). It was founded by Millán Astray, with the help of Francisco Franco, under the model of the French Legion, but incorporating elements of the Japanese samurai code of honour.

The distinctive element of the Spanish Legion is that it is a unit of iron discipline, full of rituals and slogans that tend to reinforce a mass mentality and void the individual. 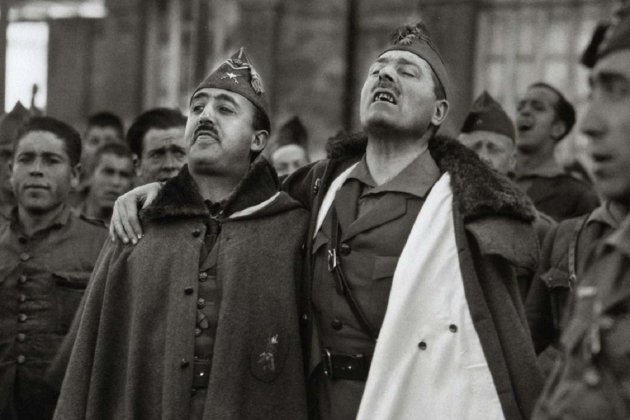 Fascist dictator Francisco Franco and Spanish Legion founder Millán Astray, in an image from the 1920s.

The seed of fascism

The Spanish Legion became the true focus of the spread of fascism, in the Spanish state, at a time when fascist groups were in a very small minority. The Legion unites the two basic elements of fascism: on the one hand, its mythology is based on the justification of violence, legitimised as a means in itself and as an emblem of virility; on the other hand, this corps exalts irrationality, placing feeling above reason.

The Spanish legionnaires' fundamental idea was that they embodied the true values ​​of Spain, compared to those who were considered the anti-Spain: workers, Catalanists, pacifists, suffragists, atheists...

The Spanish Legion can only be understood in the colonial context. Legionnaires behaved brutally in the Morocco campaigns: they resorted to the decapitation and castration of corpses, mutilation, the burning of villages, the taking of hostages, summary executions... These are not unfounded accusations by their enemies: these practices even appear in the books written by legionnaires themselves, such as Franco's Diario de una bandera ("Diary of a Flag"). These actions would not have been accepted if they had been exercised against European populations, but the Spanish population, driven by racism, encouraged these practices. 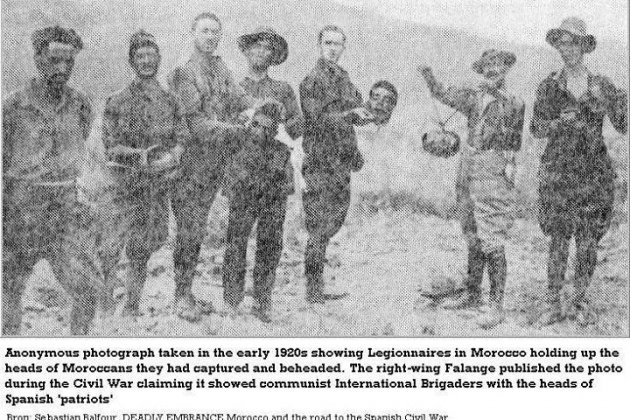 The contagion of barbarism

Spanish socialist leader Indalecio Prieto had warned, during the wars of Morocco, of the danger of "the contagion of barbarism". He argued that everything that had been done to Moroccan people under the excuse that they were just "Moors", could end up being applied to the Spanish population. And so it was. The Legion acted with great brutality in 1934, in the Asturias region of northern Spain, with summary executions of miners and even journalists. They commited atrocities again during the civil war, for example, in the capture of the city of Badajoz. But many years later they would show their brutality again: in 1970, in the Sahara, they killed some demonstrators in the so-called Zemla Massacre…

The Spanish Legion as an emblem

The Spanish Legion had a powerful ability to publicise its message, especially using appeals to violence, supremacism, intolerance, sexism... The Legion created a whole mythology that was adopted by some reactionary intellectuals: journalists, poets, novelists, film directors... in such a way that, for some, the Legion became the embodiment of the supposed values of the Spanish nation. 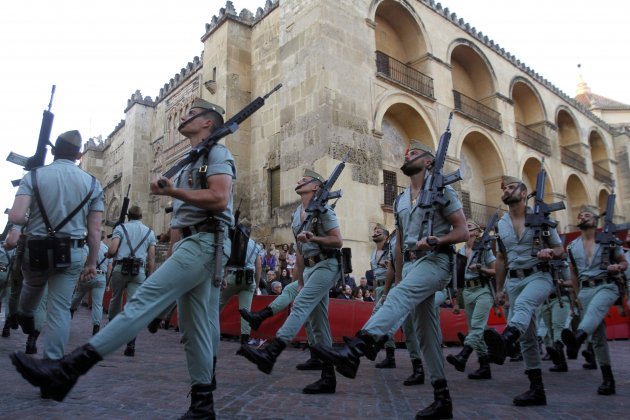 Spanish Legion soldiers in the city of Córdoba

The Spanish Legion has never been democratised. The founders of the corps, Millán Astray and Franco, are still venerated within the Legion, and values absolutely incompatible with a democratic army are still defended. It is not surprising that the Legion's anthem, “El novio de la muerte” ("The Bridegroom of Death”), continues to be sung at far-right rallies.

The video below (in Catalan, subtitled in Castilian) is based on the above article: