Zalamea de la Serena, 18th August, 1492. On that day, five hundred and twenty-seven years ago, in a town in Extremadura, then part of the Kingdom of Castile, Antonio de Nebrija completed his Grammar of the Castilian Language, in which he proclaimed: "Language has always been a partner of empire”. Thirteen years earlier, the Catholic monarchs, Ferdinand and Isabella, had consummated the dynastic union of the crowns of Castile and Aragon, the two largest territories on the Iberian peninsula. Nebrija, close to Isabella of Castile, wasn't inventing anything himself with his assertion on language and empire; rather, in the context of a difficult balancing act between two power centres, he was simply spelling out an ideological tenet of the Castilian model for Spain: that language was to be used as a tool at the service of a political project. Thanks to the efforts of Isabella's chancery, "Castilian" was - in time - rebaptised as "Spanish"; and, along with the Catholic religion, it was presented as an essential ingredient for bringing about social, political and cultural unification. 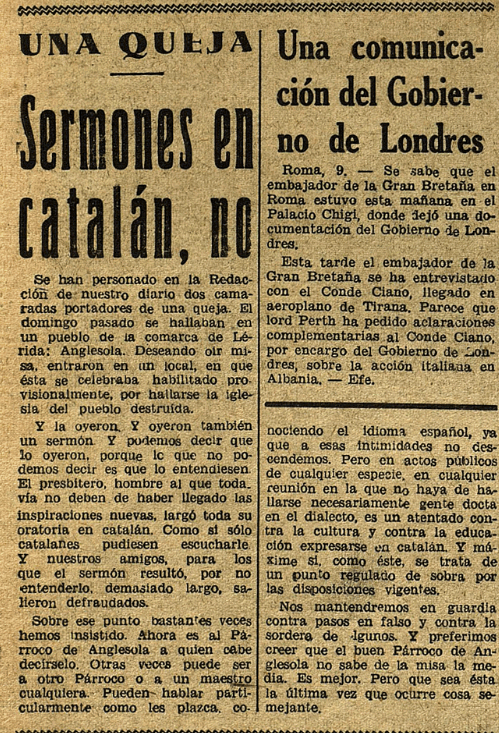 Why Castilian and not another Iberian language?

In 1492, the Castilian tongue was not even close to being the majority language in the territories ruled by the Hispanic monarchies. At a popular level, the language was totally unknown in Catalonia, Valencia, the Balearic Islands, Galicia, Asturias and in the eastern half of Andalusia. It was only partially familiar to people in León, Aragón, Navarra and Euskadi. And even within its own linguistic domain it was fragmented into dialects so differentiated that a livestock herder from La Mancha could find it very difficult to understand an Andalusian merchant, if he had to. This was one of the motives for Nebrija's great work on the grammar of the Castilian language: to put the language in order and to unify criteria. But, on the other hand, the Castilian already spoken at the court was a key common element, either maternal or acquired, among many members of a powerful medieval lobby of personal and family interests: the Iberian dynasty of the Trastámara which, decades earlier, had managed to seat its backsides on the two main peninsular thrones.

Any explanation of the rise of Castilian to the category of a language of power and culture has to focus on the bitter struggle between the two branches of this Trastámara power group: the Castilian landowning latifundista oligarchies of Isabella, versus the Catalan-Valencian mercantile classes under Fernando. This early modern "cold war" did not have language as an element in dispute, but it did include a drive to raise the category of Castilian; and simultaneous with this was the creation of a new narrative, totally falsified, concealing the Catalan-Valencian participation in the colonization of America, thus revealing how the balance had then tilted towards the side defended by Torquemada (inquisitor general), Nebrija (language and empire) and Fernández de Bobadilla (the judge who imprisoned Christopher Columbus). Curiously, these three paradigmatic characters had certain aspects in common: their language, their allegiance to the circle of friendships of Isabella, and their public repudiation of their cultural and family origins, which had been Jewish.

The Bourbons didn't invent anything

Philip V, the first Hispanic monarch from the Bourbon dynasty, was also, the first king of Spain. This is not just a minor detail: Philip V attempted to culminate, through bloodshed and warfare in the early eighteenth century, the project conceived two hundred years earlier by Torquemada, Nebrija and Fernández de Bobadilla. In this case "by right of conquest”. Between Philip V (1707) and Ferdinand VII (1808), Castilian was imposed by force - and as the only acceptable language - in schools, justice, the theatre, religious offices, commercial affairs, government administration and in publications. Spanish national unity, the byword of the Bourbon regime, embodied in the figure of an absolutist king, was based on the architecture of a Spain sketched out by Castilian power: the landowning oligarchies who were the ideological heirs of Isabella, the Catholic queen. This, in clear opposition to the traditional Catalan idea of Spain, represented by Rafael Casanova, in 1714, when in defence of the besieged Barcelona he cried out: “per la llibertat dels pobles d’Espanya” - calling for the freedom of the peoples of Spain - in plural and in Catalan.

However, a century of prohibitions and persecution under the Bourbons did not put an end to the Catalan language. "Castilianization" - that is, the imposition of Castilian across Spain - had not even taken root among the country's ruling elites. What did occur, though, was an aesthetic transformation of the Castilian ideology of Spain: Spanish liberalism (the purist, pedigree interpretation of French revolutionary Jacobinism) imagined the Spanish homeland (in its Castilian version) as the one and only true mother of all its Iberian children. In Cádiz, in 1812, the anti-Napoleonic oligarchies that proclaimed the first Spanish Constitution - La Pepa as it was popularly known - accused their Catalan, Valencian and Mallorcan companions of being backward and illiterate due to their lack of knowledge of Castilian. In contrast, in Barcelona, also in 1812, the ruling French military prefect Argereau (Catalonia had been incorporated into the French Empire) had restored the official status of the Catalan language.

It may be hard for some to stomach, but the truth is that the La Pepa constitution is the mother of Spanish nationalism. During the 19th century, Spanish liberal governments decreed just as many laws imposing the Castilian language as the absolutist Bourbon regime had during the previous century. Castilian, with a renewed idea of Spanish-ness, was reinforced as the language of power and culture; and, in that landscape of supposed liberalism, it was consecrated as the only possible language of the country. It was a qualitative leap in which the military also played a key role: the expression ¡Arriba España! - "Up with Spain!" from the Franco dictatorship (1939-1975) is nothing more than the historical evolution of the precedent ¡Arriba el rey! - "Up with the king!" used by the Bourbon soldiers fighting the Catalan resistance in 1714, or the royalist Spanish soldiers fighting against the Latin American armies of independence during the first decades of the nineteenth century. For obvious reasons, Catalan, Basque and Galician were never languages of the Spanish army.

And, no matter how difficult it is for some to accept, La Pepa is also the grandparent of Spanish fascism, insofar as it was Spanish nationalism which begat Spanish fascism. In 1939, with Franco's occupation of Catalonia completed, the first law that was decreed by the new regime was the one prohibiting the use of Catalan in public. Curiously, that same historical moment also saw the replication - with the chronological differences that were logical - of certain schemes carried down from the Nebrija era, leading to many remarkable anecdotes. There was a climate of tension between Catalan Francoists and the hard core of the dictator's regime and although it did not have its maximum expression in the area of language, the tightening of linguistic persecution directly correlated with the escalation of tension. It was significant that many of the Catalans who had joined the Francoist rebellion - and who had become the civilian arm of the dictator's regime in Catalonia - came from the most conservative sector of the extinct Regionalist League, led by Francesc Cambó.

"If you are Spanish, speak Spanish”

Ramon Serrano-Suñer, number two figure in the Franco regime and popularly known as the cuñadísimo - the "special brother-in-law" - tried to stop the linguistic clampdown, and at a meeting of Franco's cabinet (1939) he proposed maintaining the official status of Catalan, with the stated aim of winning over the Catalans to the Francoist cause, and the unstated aim of benefitting Cambó's people. The cuñadísimo was born in Cartagena, but he had spent all the summers of his youth in Gandesa, at the house of his Catalan-speaking maternal family, and knew the Catalan sociological landscape very well. Especially its conservative Carlist (monarchist) variant. Franco and his hardcore resolved the matter with an ideological coup: “We want national unity to be absolute; with a single language, Spanish; and a single character, the Spanish character”. At the same time the country's large cities were invaded by a propaganda campaign that proclaimed "If you are Spanish, speak Spanish "(using graffiti, posters both on the street and in private premises, and press advertisements). 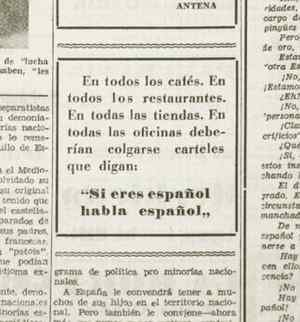 Press advertisement: 'In all cafes. In all restaurants. In all shops. In all offices you should put up signs that say: "If you are Spanish, speak Spanish."' / Source: Blog Premsa Història

"Catalan dogs, you don't deserve the sun that shines on you"

That mostly-muffled conflict also left other anecdotes: in the first mass held in Tarragona cathedral after the Francoist forces occupied the city (January 1939), the Castilian canon José Artero offered the following threat from the pulpit: “Catalan dogs, you don't even deserve the sun that shines on you." And in Reus, the mayor Josep Amézaga Botet, appointed personally by Franco, was summarily dismissed (June 1939) by the civil governor of Tarragona, colonel Machado Méndez, accused of allowing the use of Republican administrative forms, printed in Catalan! These are only two among thousands of anecdotes. However, something must have remained of Serrano-Suñer's initiative, or of the ability of conservative Catalanism to move tactically. The Franco regime would later confirm the category of "national language" which Castilian had been awarded under the liberal governments of the nineteenth century. Yet it would tolerate the use of Catalan behind closed doors: in those places where the sun doesn't shine.

And this modus operandi has survived to the present day. Appropriately dressed up in liberalism, modernity and universality. You can at least see it living on, in recent statements to the president of the Barcelona Chamber of Commerce, from a politician who, in France, deported Roma people and who in the Catalan capital decides majorities. A cutting (reproduced near the top of this article) from Solidaridad Nacional, the press organ of the Franco regime in Barcelona (edition of 13/04/1939), entitled "A complaint" - it reads like a bad joke - is full of insight. It explains that two "colleagues" went to mass in the rural Catalan locality of Anglesola and left without having understood anything said, because the rector gave his sermon in Catalan. The writer's feathers were, to say the least, ruffled: "Privately, you may speak as you please (...) but in public acts (...) where there are people unfamiliar with the dialect, it is an act against culture and against education to express oneself in Catalan (...). And the article ends up threatening: “...let this be the last time anything similar happens”.