The terrorists planned to attack 'La Rambla' with explosives from Alcanar

The terrorists who ploughed into a hundred people in La Rambla avenue of Barcelona intended to provoke an even far worse massacre in the heart of the Catalan capital. They are related to the explosion that occurred on Wednesday in Alcanar in Catalonia. The evidence that the van could have been full of explosives, as it appears it was being prepared in Alcanar, has taken everyone by surprise.

One person died in the explosion at the house in Alcanar, according to the chief of the Mosos, Josep Lluís Trapero, and are directly related to the attack on Thursday in La Rambla, as well as with the preparations for that attack. "The connection is very clear, there are very few doubts," said Trapero.

In Thursday’s attack, 13 people have died and more than 100 have been injured. Some of them are in a serious condition and the vast majority have been hospitalized. There are two persons under arrest, one from the cell in Alcanar and another that the police have identified during a control in Ripoll.

The moment in which the terrorist abandoned the van in La Rambla, the anti-terrorist division was activated across Catalonia and five hours later, the suspect in Alcanar was arrested.

The anti-terrorist crisis cabinet continued at the Ministry of Interior, from where the police operation was followed. The National Court, which is the one responsible for acts of terrorism, is organising the investigation. The examining judge of court number 4, Fernando Andreu, and the Attorney General of the National Court, Jesús Alonso, are already in Barcelona and in charge of the investigation.

The search for several terrorists

The police are searching for between 4 and 5 presumed terrorists, among them the driver of the van used in the attack on La Rambla in Barcelona, and it is unknown if he is in hiding or has managed to flee the city. It is a young man, aged approximately 18 years, from Ripoll, that it is possible that he has stolen his brother's identity documents. His brother is one of those under arrest.

The Ministry of Interior believes there are 8 terrorists implicated in the attacks. The Mossos also relate the attacks of Barcelona and Cambrils with the explosion of Alcanar, and are also trying to clarify what role a van found in the city of Vic, and also hired, might have had. 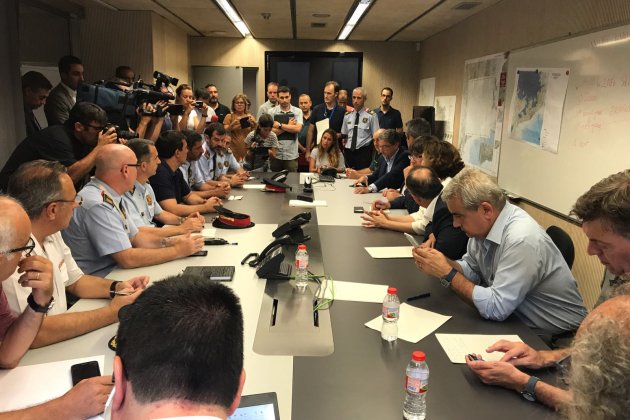 At 16.50 on Thursday, a white van broke through onto La Rambla avenue, at the level of Canaletes (near the Plaza Catalunya), at top speed, and continued speeding along until the area of the Lyceum opera house. There, leaving behind more than a hundred injured people and 13 dead, the driver ran away. The Mossos police ended up confirming later that he was not armed.

The police division sealed off the centre of the city and agents entered all nearby premises, including a restaurant where it was believed the terrorist might have taken refuge. After checks, the control of the premises was lifted and, contrary to what had been reported in the first moments, it was confirmed the terrorist was not entrenched in the premises nor had taken any hostages.

The terrorist has fled and the police continue searching for him. The security forces activated the Xarxa (‘Net’) control, which seals every exit of Barcelona with check-points. But the alleged author of the atrocity, the driver of the van abandoned in the middle of La Rambla, has not yet been found.

Daesh has claimed the attack, the second jihadist attack to the Spanish state since 11-M, through its agency Amaq, the usual route of the terrorist organisation. As a result of the attack, Spain’s National Court has taken on the investigation.

Those under arrest, one in Alcanar and the other one in Ripoll, are originally from Melilla and Morocco, respectively. None of them is the driver of the van, nor do they appear to have previous links to terrorism.

According to the line of investigation, the explosives they prepared for the attack actually exploded on the Wednesday night, causing the total destruction of the house they occupied. The person who died in the house is also directly related to the cell that attacked Barcelona. The investigation that started yesterday after the explosion was originally based on the hypothesis of an issue related to drugs manufacture.

During the search for the terrorists, a man was shot dead man after failing to stop at a police check-point. According to the forensic doctor, he died from shots fired by the Mossos. The driver was trying to leave the city and was found motionless in his car in the area near Sant Just Desvern. He had previously run down a Mossos agent on the Diagonal highway.

The man appeared motionless in his car, once out of the city. Until the bomb disposal squad could confirm that there were no explosives in the vehicle, it was not possible to rescue the body and certify the death. The man, of Spanish nationality and without previous convictions, did not have anything to do with the terrorist attack.

There are 86 injured, of whom 15 are serious, 23 less serious ones and 48 with light injuries. They have all been admitted to 15 hospitals in Barcelona, Badalona and Santa Coloma de Gramenet.