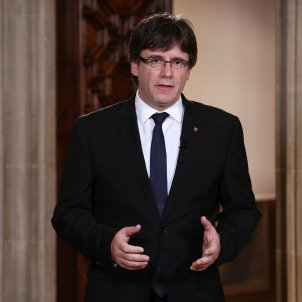 The Catalan president, Carles Puigdemont, has this evening directly replied to the speech given yesterday by Spanish king Felipe VI. "Not like that", said the president in a speech broadcast on Catalan public broadcaster TV3. "With his decision yesterday, he disappointed many people in Catalonia who think highly of him and have helped him in difficult times, and were hoping for an attitude of dialogue and concord".

Puigdemont decided to reply to the monarch with his own official speech, which he gave from the Gothic gallery of the Catalan government palace. The president said that his government cannot "share nor accept" the message the head of State "wanted to address to a part of the population".

In the president's opinion, Felipe VI missed an opportunity to speak to all Catalans, to whom he owns the crown and respect, as the Spanish Constitution charges him. "A Constitution which assigns him a moderating role which in no case has he played," said Puigdemont.

"He accepted to take on an inappropriate role that only looks to ease the decisions that the Spanish government has been studying for some time with the aim of finishing off the aspirations for sovereignty of the Catalan people," he said.

The president directly accused Felipe VI of taking on the rhetoric and policies of Mariano Rajoy's Spanish government and that, in doing so, he "is deliberately ignoring millions of Catalans who don't think like them". Specifically, he regretted that the monarch ignored "the Catalans who have been victims of police violence that has made the blood of half the world run cold".

We come from a few days especially intense, full of emotions and experiences that will remain in our memory. Once again, the people of Catalonia demonstrated yesterday that it is united, that it is a single people, that closes ranks in the defense of the values ​​of democracy, and did it in the way we always do and we want to do things: with civism and in peace. There were very symbolic images that help to understand this idea of ​​brotherhood and transversality with which Catalonia faces its national challenges: people with flags of Spain and independentist flags sharing the same cause. The rejection of violence, rejection of the unjustifiable burdens of the police forces against the civilian population concentrated peacefully and the defense of the elementary civil rights.

In this sense I would like to put in a lot of value the attitude of the hundreds of thousands of Catalans who mobilized yesterday in an unprecedented strike in our country. You did it without incident, overcoming fears and threats and, above all, being faithful to the peaceful attitude with which we always want to express.

That is why we must feel strong if we are united and we remain in this attitude. For more violence that some want to put, which is not acceptable anywhere and that has been rebuffed by many people and received with much concern in Europe, we have to maintain as one people. With differences, with discrepancies, with errors and, sometimes, because we also have to say, with great successes. Do not let us be beaten by those who, by impotence, fear or cowardice, would love us otherwise. You do not know the admiration that as a people we are collecting the whole world for this attitude so civic and so compromised.

Unfortunately not everyone would want things to go well for us. Some pretend to present the Catalan claim as illegitimate, illegal and criminal. There are those who think that pursuing ballot boxes, ballot papers and voters is an inexcusable requirement of the rule of law, and that anything goes to prevent a people from expressing themselves and deciding. We are all very calm and serene, and above all very comforted: what we have done, what we are doing and what we will do is what other peoples have already done and other peoples will do in the future. We follow a path democratically marked by the will of the citizens, and this instead of being fought should begin to be understood and be respected.

That is why I want to address the Spanish citizens who in these days have expressed commitment to the demands of the Catalans; citizens who have sent us their friendship and their very valuable solidarity in the moments that we are living. Surely the Spanish authorities should explain better what happened in Catalonia, with more pondered visions that help to understand a political problem that we know complex. However, I am grateful for the effort, which we are directly aware of, of many people to accompany the Catalan people in over claims. We are a single people, who love the languages ​​they speak, who have no problem with identities, nationalities and cultures, who want to continue contributing to the development of the Spanish State and will never dispense with the enormous wealth that plurality represents.

We are, in effect, a society hugely cohesive in diversity. That is why the message that the head of state wanted to direct to a part of the population can not share or accept. The King endorses the discourse and policies of the Rajoy government that have been catastrophic in relation to Catalonia, and deliberately ignores the millions of Catalans who do not think like them. To deliberately ignore the Catalans who have been victims of police violence that has frozen the heart of the world. The king lost yesterday an opportunity to address all the citizens to whom the crown owes, and to which he owes respect because it is entrusted to him by the Constitution. A Constitution that gives it a moderating role that in no case has had, and that yesterday declined with hardness. Neither has he had an interest in knowing the opinion and vision of the Government of the Generalitat at any moment of this crisis, and has accepted to assume an inadequate role that only seeks to alleviate the decisions that the Spanish Government has long studied to liquidate the aspirations of sovereignty of the Catalan people. Some aspirations that he does not hesitate to treat as criminal and illegitimate, and against which he uses unlimited resources.

I would like to address Your Majesty directly, in the language I know that knows and speaks: not so. With your decision yesterday you disappointed many people in Catalonia, who appreciate it and who has helped in difficult times of the institution. People who expected of you another tone and an appeal to dialogue and concord. As  President of the government of Catalonia, I think it is necessary to address the whole of the citizenry, everyone, think as you think, to guarantee the government's commitment to protecting all citizens, to ensure their rights to freely express themselves and respect their decisions. We will do this with the commitment we assumed at the beginning of the mandate. A commitment to do so with an open door always to dialogue and respect for the other. We will not move from here, and I want to guarantee to the citizens that you are listening to me that my government will not deviate even a millimeter from the commitment of peace and serenity, but at the same time firmness, with which we want to do things. That's why I reiterate what I said Monday: this moment calls for mediation. We have received several proposals in the last few hours, and we will receive more: they all know firsthand my willingness to undertake a mediation process. We will reiterate it as many times as we need. Peace, dialogue and agreement are part of the political culture of our people. However, we have not received any positive response from the State to any of the mediation options that are already on the table, and I believe, in all sincerity, that it is again a serious irresponsibility not to attend to the requests sent by people from within and from outside Catalonia and the Spanish State so that this conflict is ingrained from politics and not from the police. Today we have closer to our historic desire than yesterday. Sunday we were able to make a referendum amid an ocean of difficulties and unprecedented repression; yesterday we gave an example in the follow-up of the general stoppage; and I am sure that in the coming days we will return to teaching the best face of our country when the institutions of Catalonia have to apply the result of the referendum. As long as we maintain trust and isolation to every provocation and every intention of violence. We do not want it at home or want it anywhere. Let us become strong in dignity and we will be a people capable of making possible the dream that is proposed. 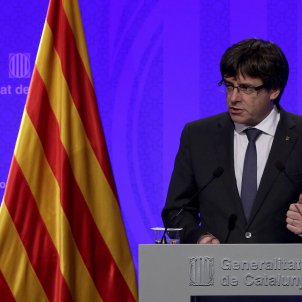 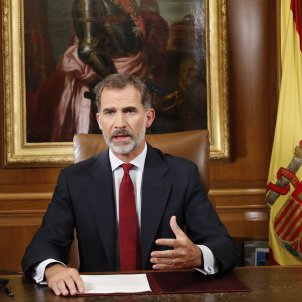